The Fund rose 8% (SEK) in May compared to the benchmark index which rose 9.3% (SEK). Positive sentiment towards frontier and early emerging markets continued during the month, however, Vietnam posted better returns compared to the peers as business and activities reverted at a considerably faster pace than globally. Local investors led the rally and went after blue-chip deep value stocks and mid-cap names.

The Fund reduced its exposure in Materials due to superior relative returns and increased its exposure to Real Estate having corrected lately and offering value/growth.

Vietnam’s stock market went up 9.3% (SEK) in May compared to an increase of 3.7% (SEK) in MSCI Frontier Markets xGCC and a decline of 3 % (SEK) in MSCI Emerging Markets during the same period. We witnessed increased participation mainly from local investors and the average daily trade value jumped ~29% from last month to USD 221m. Foreigners remained on the selling side albeit at the slowest pace compared to the last three months average. Foreigners sold USD 39m in May.

Surprisingly, Vietnam is one of the least devastated countries from COVID-19. As of May 31, Vietnam had 279 patients recovering out of the total reported cases of 328 with zero reported deaths. However, around ~8,000 persons are under quarantine and most of them are international arrivals who are required to remain under quarantine for 14 days. The government also opened up most of the businesses and leisure spots. On the ground, we note that life seems to be almost back to the pre-COVID-19 situation and traffic jams are a regular sight throughout the main cities. International tourism is yet to be opened up and visa issuance is still halted, affecting tourism-related businesses.

The economy is showing signs of recovery at a considerably faster pace than expected and re-gaining the expansionary mode in contrast to the contraction in the previous three months. In May, the Industrial Production Index rose by 11.2% M/M (however still down 3% Y/Y), mainly led by manufacturing.  Inflation, as measured by the consumer price index, inched up by 2.4% Y/Y during the month, down 0.03% M/M, and attributed to a 5% reduction in fuel prices from the previous month.

Foreign investment is yet to pick up and travel restriction is the likely culprit. Disbursed FDI in the first five months of 2020 is estimated to be USD 6.7bn, declining 8.2% Y/Y. Total foreign investment in Vietnam as of May 20, 2020 (including newly registered capital, adjusted registered capital, and value of capital contribution and share purchases of foreign investors) stands at USD 13.9bn, down 17% Y/Y. We do not foresee the investments picking up in the short term unless Vietnam opens its borders for global investors. However, as rumors suggest, we might see a gradual reopening of the borders for selected countries in South East Asia, having lion’s share of tourism and investments in Vietnam, within the next couple of months.

Since Vietnam is a trade led economy and well-integrated to the global trading eco-system, an easing of lockdowns in Europe and the US is likely to bode well for the economy from Q3 of this year. Secondly, the increasing rift between the US and China amid the increasing trend of production diversification by global businesses makes Vietnam the major beneficiary of serving as a new production hub for the western world.

One potential risk to watch out for in Vietnam is the currency risk. Given a solid base of foreign exchange reserves and a strong pipeline of FDI, we do not see it as a major risk as of now, however, lack of tourism revenue and prolonged travel restrictions can result in depleting FX reserves and current account balance. In addition, the USD exchange parity with RMB is also one of the factors which can result in VND’s depreciation as the State Bank of Vietnam adjusts its currency according to the regional peers, and any move in RMB and other currencies might result in VND depreciation despite strong fundamentals in favor of protecting exports. 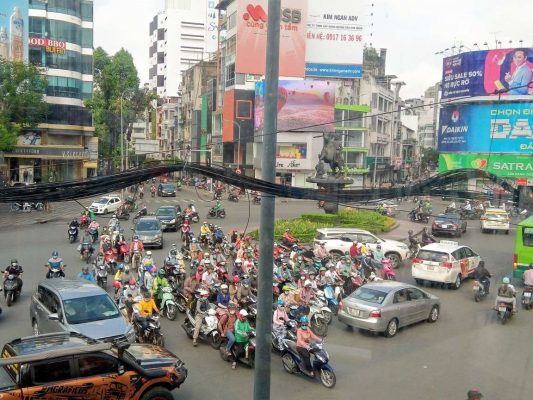 Roads are getting crowded as life is returning back to normal after easing lockdown.