The Fund fell by 23.6% (SEK) in March compared to the benchmark index which went down 20.9% (SEK). Rapidly increasing virus cases globally led to a massive sell-off in Vietnam in-line with the global markets. The Fund´s exposure is tilted towards mid-cap names which tend to perform worse in a market sell-off, and hence could not keep pace with the benchmark in the second half of March. The Fund’s overweight in Consumer Discretionary (Phu Nhuan Jewelry and Danang Rubber) and Materials (Hoa Sen and Hatien 1 Cement) contributed negatively to the Fund. In addition, our off-benchmark bet in Information Technology, FPT Corp, also got beaten down despite being in the least affected sector by lockdowns. On the flip side, the Fund’s underweight in Real Estate (Vin group stocks), Consumer Staples (Vietnam Dairy and Thanh Thanh Cong) and Industrials (Vietjet Aviation) added alpha during the month.

In March, the Fund reduced its exposure in the Financial and Material sector.

Vietnam followed the global market trend of continued negativity and fear of prolonged economic standstill. Apparently, Vietnam remains one of the least virus-hit countries with only 233 reported cases and zero death (according to official data), however, we are yet to find out how many people were tested and if there are any lapses in data provided by the government. Vietnam’s largest trading and tourism countries are the initial epicenters of COVID-19, China and South Korea, so the numbers look understated. Vietnam implemented a two weeks nationwide lockdown from April 1st to April 15th with only essential services being allowed to be open (e.g., food, finance, health). With few exceptions, all international travelers are banned from entering the country. Domestic flights have been significantly reduced during the loose lockdown period. Passenger trains between Hanoi and HCMC are also limited to two per day.

While we await the detailed data for March, preliminary data suggest an economic slowdown in the country. PMI, which is a leading indicator of industrial activity, fell to 42 during the month (lowest in the last 6 years). The index of Industrial production inched up by 5% Y/Y compared to a 10.1% average growth in the last three years. Registered FDI is down by 20% to USD 8.6bn while actual FDI declined by 6% to USD 3.8bn. The initial data hints towards Vietnam managing to report a current account surplus despite slowing trade. VND lost -0.7% against USD in the last week of March (-2% YTD). Despite the dip, the VND is still relatively strong in comparison with regional peers given the recent USD rally.

GDP during 1q20 grew by 3.82% Y/Y, which is the lowest growth since 2011 in the first quarter. ADB has slashed Vietnam’s full-year GDP forecast to 4.8% from 6.9% initially, which can further be revised downward if the economy is not once again operational by June.

To spur the economy, the government is working on a relief package, envisaging a tax break for affected sectors (such as tourism, transportation, textile & garments, hospitality, etc.), a moratorium on interest & principal payments, low interest borrowing, etc. The package is expected to be announced in the first half of April.

After ordering the banks to practice forbearance on borrowers in February, the SBV introduced additional incentives and reduced 1) the refinancing rate to 5.0%, 2) rediscount rate (-50bps to 3.5%), 3) overnight rate for interbank electronic payments and lending to compensate for capital shortages in clearing payments and 4) offering rate for valuable papers in the SBV’s open market operations (-50bps to 3.5%). In addition, SBV reduced deposit and loan rates. Demand deposits and term deposits of less than 1 month are capped at 0.50% (-30bps), term deposits of 1-6 months are capped at 4.75% (-25bps), and short-term loans are capped at 5.5%/year (-50bps). 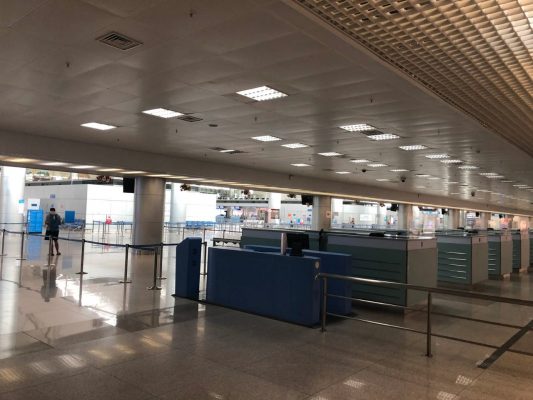 The international terminal at Tan Son Nhat International Airport even before the shutdown.