The fund fell 3.6% in June, outperforming the benchmark Index, which dropped 4% during the month. Our underweight in Real Estate (Vinhomes, Vingroup, Novaland) contributed positively to the relative performance of the fund as the sector was negatively affected by legal and regulatory challenges in Ho Chi Minh City. In addition, our underweight in Consumer Staples (mainly in Vinamilk) also had a positive contribution. Negative contribution accrued from our overweight in Financials (VN Direct Securities, Vietinbank, Lien Viet Post Bank) and Materials, which (Ha Tien 1 Cement, Hoa Sen Group) reduced the fund’s alpha. Except for Vietcombank, financial stocks remained weak due to concerns over capital requirements amid foreign ownership limits. Materials stocks also had a tough time due to the recent surge in input costs. High competition in the cement and steel sectors did not allow the producers to fully pass the price hike to consumers. (all changes in SEK).

During the month, the fund added Vinhomes, a leading real estate company, as property developer resumed development in Ho Chi Minh City after settling the legal issues, which caused delays in most of the projects in the city for past few months. Vinhomes (VHM) launched the pre-sales of the Vinhomes Grand Park project in District 9 and the first phase of sales were massively oversubscribed.

The Vietnam market continued to slide in June over increasing concerns of a trade war and the US ban on Huawei. Most investors were nervously looking forward to the meeting between the leaders of the U.S and China at the end of June. Thus, local investors remained sidelined and reduced exposure in the equity market. Liquidity stayed soft at USD 170m in average daily trading value. The market closed the month with a negative return of 4% net (SEK), compared to a 3.5% gain in MSCI Emerging Markets and a 0.3% decline in MSCI Frontier Markets xGCC. Foreign investors, however, turned buyers by an amount of USD 19.5m during June, mainly via ETFs.

In late June, Covered Warrant (CW) products were introduced in the market and drew great attention from local investors. CW offers high leveraged positions, thus it attracted retail investors in particular. Such products have been very popular in other South East Asian nations, such as Thailand and Hong Kong. In its early days, we have seen small ticket sized warrants being issued by the brokers, however, the interest of local investors remains high and expected to gain traction going forward.

Further on, MSCI announced to include Kuwait on the watch list for upgrading to the Emerging Markets Index, leaving Vietnam to be the single largest market in the Frontier Index. Even though Vietnam is not eligible to be upgraded to the Emerging Markets Index this year, it is very positive for Vietnam as the weight of Vietnam will significantly increase in the Frontier Index from current 18%.

The European Council and Vietnam officially signed the European Union – Vietnam Free Trade Agreement (EVFTA) and the EU – Vietnam Investment Protection Agreement (EVIPA) in Hanoi on June 30th. After the implementation of the agreements, 99% of import tariffs will be eliminated, in which 65% will be removed immediately, and the rest will be gradually brought down to zero within 10 years. This offers a great opportunity for Vietnamese goods to better penetrate into the EU markets. Vietnam exported USD 42.5bn worth of goods to EU countries while imported USD 13.8bn from the region in 2018. Besides offering significant economic opportunities, the trade agreement also offers knowledge-sharing and provides an opportunity to enhance its labor conditions, safety, environmental issues, and consumer protection. 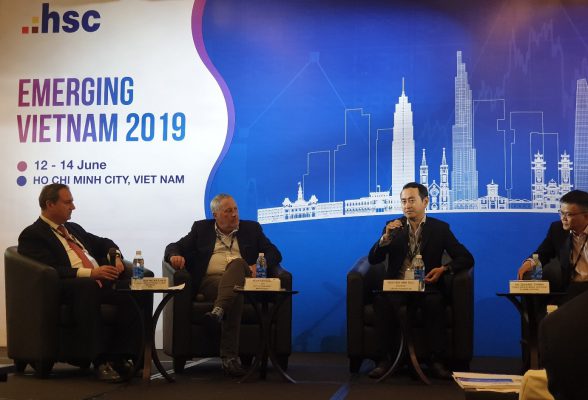 Tundra’s Duc sharing his views about the market in a conference in Vietnam.