The Fund fell 1.7% (SEK) in January compared to the benchmark index (FTSE Vietnam Index Total Return, SEK), which fell 1.1%. Vietnam remained positive throughout the month, but shed 5.5% in the last two trading sessions when the market re-opened after the Lunar New Year holidays on the back of the news regarding the Coronavirus. The main reason for the negative relative performance was due to our major off-benchmark bet FTP Corp (Information Technology) which performed poorly during the month. However, we believe that this is temporary and as soon as fears revolving around the Coronavirus are subsided, the stock should revert to previous levels. In addition, underweight in Real Estate also contributed negatively to the Fund’s relative performance, amplified by our real estate bets outside the benchmark. On the positive side, overweight in Financials and underweight in Consumer Staples added relative return to the Fund. Better than expected results and anticipation of the government’s detailed plan on re-capitalization of banks kept investors’ interest alive in the sector. Consumer Staples remained under pressure led by Masan and Vinamilk. Post announcement of the Masan acquisition in VinCommerce, resulted in a severe beating of the stock while Vinamilk’s muted growth triggered lackluster interest.

No major changes were made in the Fund in January.

The Vietnam market started the new year on a negative note and closed down 1.1% (SEK) in January, compared to a decline of 1.8% (SEK) in the MSCI Emerging Markets and a 3.3% (SEK) gain in the MSCI Frontier Markets xGCC. Market performance was positive throughout the month until it re-opened after the Lunar New Year holidays amid the news regarding the Coronavirus. As a result, the Vietnam market fell around 5.5% in the last two trading sessions of the month. The Coronavirus, which broke out during the holidays, rattled global markets and Vietnam´s proximity to China. The fact that China is one of the largest trade partners (17% of the total) and FDI player (20% share in 2019) added concern to Vietnam’s economy. At the end of January, there were reportedly six known cases concerning the Coronavirus. Vietnam has currently imposed travel restrictions and limited trade activities to and from China to restrain the virus spreading, however, this also means that economic activities will be affected until all is back to normal. Sectors such as Airlines, Tourism, Entertainment, Retails, and Manufacturing were the worst performers as they witnessed immediate impact of the slowdown with China shutting down.

January’s inflation (CPI) surged 6.4% Y/Y, the highest inflation since August 2013. The pronounced inflationary pressure came from the food/foodstuff category due to a higher consumption demand during the Lunar New Year. Inflation is expected to ease in the coming months as food prices normalize while global energy prices are coming down. Committed FDI in January jumped 2.8x to USD 4.46bn (mainly related to a thermal energy power plant with a total investment of USD 4bn) while disbursement modestly increased by 3.2% Y/Y to USD 1.6bn. The trade balance was reported at USD -100m, in which export was down 14.3% Y/Y to USD 19bn and import declined 11.3% Y/Y to USD 19.1bn. The New Year holidays and the fact that China shut down for another week due to the Coronavirus were the primary reason in the trade slowdown. 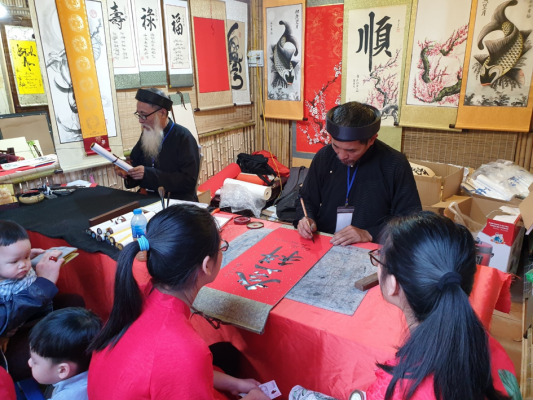 Preparations for the Lunar New Year.