The Fund fell 2.1% (SEK) in February compared to the benchmark which fell 4.8% (SEK). Concerns on increasing numbers of coronavirus cases kept markets in the negative territory and stocks related to tourism, FDI and manufacturing were affected the most. The Fund’s underweight in Industrials (Vietjet Air, Hoang Huy), Real Estate (Vingroup stocks) and Consumer Staples (Vina Milk, Masan) fared well for the Fund. In addition, our off-benchmark bets in Financials (Saigon Thuong Bank and Bank for Foreign Trade) and Information Technology (FPT Corp) added alpha for the Fund. Negative contributions accrued from our stock selection in Energy (Southern Gas Trading).

In February, the Fund reduced its exposure in Financials due to a strong run-up despite the bearish sentiment in the market. We believe valuations have come at a reasonable level and the Fund intends to allocate accordingly in the coming months, focusing on long term structural growth but severely hit by the coronavirus in the short term.

Vietnam’s market retreated 4.8% (SEK) compared to a decline of 4.3% (SEK) and a 6.1% (SEK) in the MSCI Emerging Markets and MSCI Frontier Markets xGCC respectively. Liquidity marginally improved in February to USD 180m in average daily trading value compared to USD 171m in January, which was low due to the Lunar New Year holidays in January. Foreigners turned seller to the tune of USD 131m compared to buy of USD 82m in January. A majority of the foreign selling was in blue-chip names and ETFs, driven by global outflows.

The Vietnam market continued its negative spell due to concern about the COVID-19 spreading outside China resulting in travel restrictions and tightening of trade. While the number of infected cases kept increasing in China during the first half of February, we witnessed a slowdown in new cases in the latter half of the month. Also, a sudden rise in cases and deaths outside China (especially in South Korea, Iran, and Italy) sent another fear wave to the investors. Vietnam, however, seems to have been standing at only 16 infected for some time now, but since its increasing reliance on regional countries for trade and FDI makes it vulnerable to indirect economic infections. South Korea and China are major FDI players in Vietnam and hold more than half of the trading market share. They have been cut-off/restricted for travelling and trade for almost a month hence negatively affecting tourism, FDI and trade. Korea and China contribute around 56%, 30% and 71% cumulatively in tourism, FDI and trade.

We have already started seeing early signs of an economic slowdown in Vietnam due to restricted movements across the border. PMI in February dropped to 49 for the first time in the last four years, reflecting contraction in manufacturing and new trade orders. It does not mean that demand has come down, however, it reflects more of a supply-side constraint as China is yet to be fully operational amid trade/travel restrictions adding to the problem. Companies are likely to run out of inventories if the borders between Vietnam and China remain closed. Registered FDI in the first 2 months stood at USD 6.5bn (down 23.6%) while disbursements were USD 2.5bn (down 5% Y/Y). As expected, tourism was the most hit sector, as reflected by the number of Chinese and Korean tourists dropping by 62.4% Y/Y and 31.3% Y/Y respectively. In terms of trade, for the first two months of 2020, export-import value increased by 5.6% Y/Y (6.9% Y/Y in February), mainly represented by computers & electrical products, mobile phones, and spare parts. 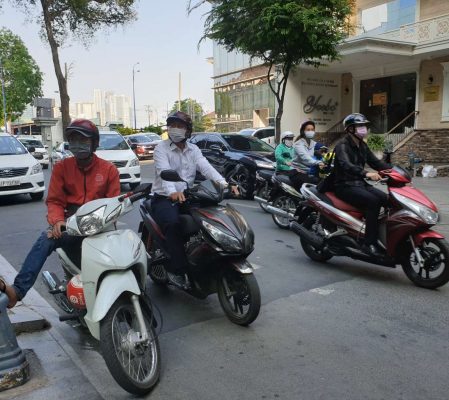 A street in HCMC – most people wearing masks due to the fear of the coronavirus.