In USD the Fund rose 3.7% (EUR: +5.7%) during the month, compared with MSCI FMxGCC Net TR (USD) which rose 0.1% (EUR: +2%) and MSCI EM Net TR (USD) which fell 1.6% (EUR: +0.3%). The excess return during the month was primarily about the Fund’s stock selection. In fact, out of the Fund’s 8 largest markets, only Nigeria (7% of the Fund) rose more than the Fund as a whole. The best contribution in September was received from the Fund’s largest position, Pakistani IT company Systems (8% of the Fund), which rose 22%. Good contributions were also received from Vietnam, where the bank Lien Viet Postal Bank (3.3% of the Fund) rose 24% and the steel company Hoa Sen Group (1.5% of the Fund) rose 38%. We also received good contributions from Sri Lanka where, as an example, the consumer goods company Hemas Holdings (1% of the Fund) rose 25% in September. Earlier in the month, our planned mergers took place where our other three funds became part of the Tundra Sustainable Frontier Fund. The work was carried out without complications. We are pleased to see that an overwhelming majority of the unitholders in the merged funds chose to join as shareholders in the combined fund, and we are particularly pleased to note that they have had a good start as unitholders. As a result of the mergers, the Fund’s fund assets have risen from just over USD 120 million at the end of August to just over USD 160 million at the end of September. During the month, we added two new holdings. We made our first purchase in the Philippines where we invested in the consumer staples company Century Pacific. The company was founded in 1978 as a producer of canned tuna. Marine products still account for more than 40% of sales. Gradually, they have however expanded their range to canned meat and in recent years they have entered the market for coconut-based products, as well as dairy products. The successful expansion into new product categories means we view the company as a skilled brand builder in the long shelf-life category (no fresh products are produced). We also like the well-developed sustainability thinking surrounding the business. It is no coincidence that we are only now adding our first Philippine holding. The market, like many smaller emerging markets, has had some tough years behind it and is now trading at a large discount compared to its historical average. A good time for us to take the first position in a market that thematically fits well with our other markets. Our other new position is Pakistani Interloop. The company is Pakistan’s largest listed textile producer and one of the world’s largest manufacturers of socks and tights. Recently, they entered the jeans market. It has the most developed sustainability work we have encountered in the sector, which we see as an extremely important competitive advantage, especially in export-oriented clothing manufacturing. Management has significant shareholding and clear incentives to grow the business. One of the key factors in choosing investments is that we want to see that society benefits from a company’s success. This minimizes regulatory risk. For Pakistan, the most important goal for the next 5-10 years is to increase exports of goods and services. To achieve this goal, the largest sector, textiles, must succeed. The most difficult part of exporting is not to constantly keep the absolute lowest prices, but to build a customer base that trusts you as a producer. Here, Interloop today has a superior position among the listed companies with most of the world’s largest buyers of textiles on its customer list. Customers include Nike, Adidas, Levis, H&M, and Amazon. As Pakistan will now do what it can to help textile exporters, Interloop is very well positioned to benefit.

MSCI FMxGCC Net TR (USD) rose 0.1% (EUR: +2%) during the month, compared to MSCI FM Net TR (USD) which rose 0.7% (EUR: +2.7%), MSCI EM Net TR (USD) which fell 1.6% (EUR: +0.3%) and MSCI World Net TR (USD) which fell 3.4% (EUR: -1.6%). For the first month in a very long time, frontier markets rose significantly more than the world index, which shows that under normal market conditions these markets do many times live their own lives and thus provide diversification. This is because they are primarily controlled by local investors (often 80-90% of trading). As bond yields in most of our markets have been declining in recent months, local investors have shifted some capital to the equity market (see attached graph). During the month, we noted two somewhat surprising interest rate cuts. Nigeria lowered the interest rate by 100 basis points and Egypt lowered the interest rate by 50 basis points. Several of our markets, especially Pakistan, Bangladesh, and Vietnam, have surprised positively recently in their macroeconomic updates, where we note that these countries’ exports have held up better than expected, while remittances (capital from residents working abroad) have risen, rather than previous expectations of declines. Remittances in both Pakistan and Bangladesh are now higher than before COVID-19 struck. All in all, this means that the countries’ current account (exports minus imports of goods and services) has strengthened in recent months, which has surprised many foreign investors. One should see the unexpectedly positive development from a multi-year perspective, however, where most of the markets we invest come from 6-7 rather difficult years. We recently attended one of the major investor conferences for frontier markets. An Egyptian bank explained it best: “Although 2020 has been difficult, it is not the worst year for Egyptian companies in the last decade. The Arab Spring of 2011, the subsequent lack of USD and the 50% devaluation of the Egyptian pound in 2016 were significantly worse for them”. We argued early on that companies in our markets are better equipped to deal with external disruptions in their operations, as they encounter them more often. This is something foreign investors often misjudge. The coming month will be very much about the presidential election in the United States, where, as we said earlier, we see that a win for Joe Biden would be perceived as positive for emerging markets in general. This is because Biden is perceived as more predictable, less opposed to globalization, and less nationalistic. Developed equity markets, especially the United States, have significantly outperformed emerging markets which have had ten rather mediocre years behind them. A win for Biden we believe is one such factor that would make the world’s major institutional investors consider increasing their long-term allocation to emerging markets. Given that smaller emerging markets with their smaller size are more sensitive to foreign investor flows, they might with a lag be impacted even more. Risk-reward looks interesting. Our markets have already gone through many years of outflows and the valuation gap against developed markets is historically very high. Local investors have recently been able to absorb remaining foreign selling. Even smaller foreign inflows could create a fairly large impact on our markets given their smaller size and limited liquidity. It will be an interesting election night on November 3rd.

One Pakistani company, EFU Life Assurance Limited, was divested from the Fund due to financial considerations. 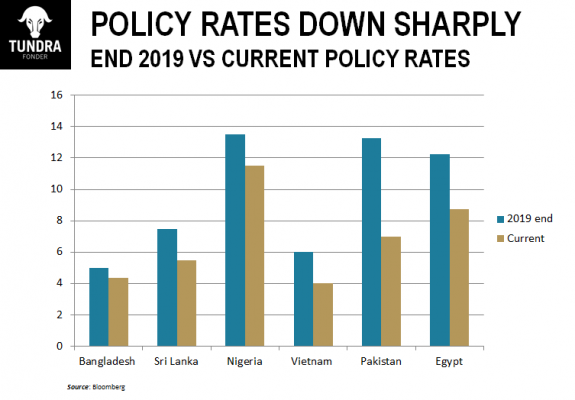