In USD the Fund rose 4.6% (EUR: +4.6%) in October, compared with MSCI FMxGCC Net TR (USD) which rose 1.7% (EUR: +1.7%) and MSCI EM Net TR (USD) which rose 3.6% (EUR: +3.6%). The last trading day for October was the 29th. Good stock selection in Vietnam and Pakistan accounted for about half of the excess return during the month. Lack of holdings in Romania and Slovenia also contributed positively. Negative contributions were received from Bangladesh and Sri Lanka where we saw profit taking after a couple of months of strong development and, in Sri Lanka’s case, an increase in the number of COVID-19 cases (from low levels should be added). 15 of our portfolio companies, corresponding to approximately 45% of the Fund’s assets, have now reported their results for the third quarter (calendar year) 2020 (see Table 1). The median increase in earnings per share and sales was 13% and 10% for the first nine months of the year, compared with the same period in 2019. For the third quarter in isolation, the increase in earnings per share and sales was 63% and 21%, respectively. As can be seen from the table, it is mainly Pakistani and Vietnamese companies that have reported so far. Traditionally, these companies are quick to report and both countries have handled the COVID-19 crisis relatively well. Pakistan is also recovering from a couple of tough years of economic crisis, which means a low comparable base. However, it is clear that the companies in our markets have so far coped with the COVID-19 crisis significantly better than in most developed markets.

Among the winners during the month was Vietnamese Masan Group. In a report filled with items affecting comparability, we conclude that the margin development in their newly acquired food chain VCM was significantly better than expected. In addition, the share was lifted by the restructuring of their smaller mining business, where Japanese Mitsubishi is let in as a partner. Possibly a first step towards the divestment of this somewhat odd business in the otherwise consumer-focused company. Worth highlighting was also our largest holding, Pakistani Systems Ltd, results. Systems increased earnings per share by more than 50% compared with the corresponding period in 2019. Despite significantly higher selling expenses, the gross margin increased by 4%-points compared to the second quarter. The fourth quarter will be negatively affected by the stronger rupee (5% stronger since the bottom at the end of August). Although current growth rates will inevitably come down, Systems Ltd remains the company in the portfolio where we have the strongest long-term conviction looking 5-10 years ahead.

During the month, we sold our position in Pakistani DG Khan Cement. As our investors know we are not typical investors in cyclical sectors. As Pakistan’s economy further recovers, the valuation of DG Khan looks far from stretched, but we note that we have had a good run from the bottom and that the competition for a place in the portfolio has intensified. During the month, we also sold our position in Nigerian United Bank of Africa. The background is the company’s reluctance to communicate and failure to respond to our ESG forms despite repeated attempts, through various channels, for a long time.  Instead, we have added two new holdings, one from the Philippines and one from Indonesia. In the Philippines, we have acquired the leading online broker Col Financials. What we especially like about the company is their vision to develop a complete savings platform, not unlike Swedish Avanza. At best, this is an “Avanza 20 years ago”. At present, there are about 300,000 customers (Avanza 1.3 million) in a country with just over 100 million people (Sweden 10 million). A very important factor behind Avanza’s high margins is the income they receive from fund retrocessions (on average, fund companies pay about 50% of the management fee to online brokers). These normally account for just over 20% of Avanza’s revenues (slightly lower in 2020 when brokerage revenues were unusually high), while today they account for just over 1% of Col Financial’s revenues. Col Financials is also an entrepreneurial company where the founder remains active in the company. Given the limited liquidity in the share, the position is relatively small (around 1.5%) and we have taken the position with a perspective of 10-20 years.

Our second position is in the Indonesian healthcare company Hermina Hospitals. The company was started 35 years ago and currently has 37 hospitals in operation. Hermina started as a specialist in maternity care, for which they still retain the leading position among private healthcare companies. About 5 million children are born in Indonesia every year, of which just under 2 million at home. As prosperity and educational levels increase, the proportion of women giving birth in hospitals has continuously increased and will continue to do so. What we especially like about the company, however, is their partner model. Skilled specialist doctors who see a demand in their hometown can contact the company and together they build a new hospital where the doctor becomes a partner. There are then established valuation multiples when the doctor one day wants to retire, where his/her shares can be sold to the next generation of doctors, or the company. Indonesia is a large country with 270 million inhabitants, spread over 13,000 islands. Hermina’s co-ownership program gives them a great advantage in the continued establishments as they are able to attract successful doctors who know their areas well and have an existing customer base. One of our criteria for an investment is that we want to see that society benefits from a company’s success. This is because it reduces the risk of unexpected changes in regulations, something that is common in our markets. Unlike most private hospitals, all of Hermina’s hospitals are connected to Indonesia’s relatively new health insurance system. This means that the company helps the state to ensure access to care for the entire population, and thus it is in the state’s interest that the company continue to grow. The company has only been listed for 2.5 years and liquidity is still on the lower side. This means the position is at this stage relatively small (1.5% of the fund).

MSCI FMxGCC Net TR (USD) rose 1.7% (EUR: +1.7%) in October, compared with MSCI EM Net TR (USD) which rose 3.6% (EUR: +3.6%) and MSCI World Net TR (USD) which fell 2.0% (EUR: -2.0%). The last trading day for the Fund was October 29, which means that we use the same date for market performance. This means the third straight month in which frontier markets outperformed the world index. The last time this happened was at the end of 2018. As we have written on a number of occasions, our markets have been run exclusively by local investors who reallocate to the stock market given falling interest rates. Foreigners have remained sellers, but local investors, who normally make up the majority of the activity, have had no problems absorbing the flows. This is probably the reason why our markets have managed to show a cautiously rising trend despite rather negative developments in global stock markets.

In November, we have two important factors that will impact global market development. Firstly, the US presidential election. At the time of writing, the election outcome is not definite, but the most likely outcome appears to be that Joe Biden will be the new president. As we have previously written, we believe that a win for Biden could mean that interest in emerging markets increases, given that he is considered less nationalistic and less opposed to globalization. Many investors in emerging markets, including us, have expressed frustration over the low level of interest and pointed out the historically high valuation gap to developed stock markets. As everyone knows, stock markets are primarily driven by expectations but also hope and anxiety. The latter two we sometimes refer to as “sentiment”. The US election is one such factor that we believe may prompt institutional investors around the world to reconsider their current allocation to emerging markets.

The second factor is the rising number of COVID-19 cases worldwide. We have already seen strong measures in Europe that will impact global demand during the last two months of the year. Even though our markets have so far been less affected than developed markets, there is a risk that we will also see similar measures here and that the recovery in exports will slow down. That said, we note a certain difference in the measures this time, e.g. the handling of schools that in most cases remain open. It is also reasonable to assume that the world has learned some useful lessons and that the impact, from an economic perspective, will be somewhat less noticeable during this second wave. Our markets did not have access to the fiscal stimulus tools that the U.S. could release during the first wave, but both in terms of impact to GDP growth and corporate profits we can conclude they generally have shown a strong resilience during the crisis, exemplified by our portfolio companies so far this year. We should see some negative impact based on the likely lower global economic activity at the end of the year. Given how well the spring was handled with the results in hand, it is difficult to be too pessimistic. 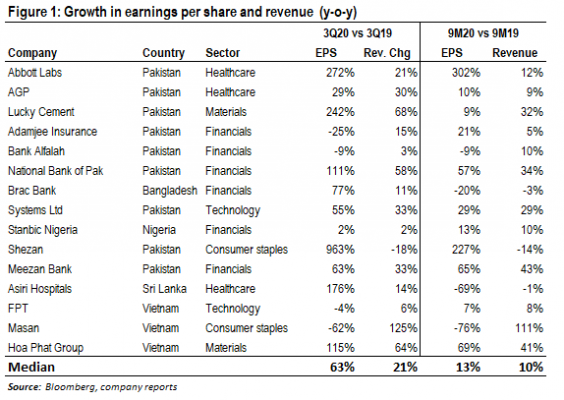