The Fund fell 5.9% during the month, compared to MSCI FMxGCC Net TR (SEK) which fell 6.1% and MSCI EM Net TR (SEK) which fell 4.3%. The largest contribution relative to the index was obtained from our stock selection in Vietnam, both our overweight and stock selection in Pakistan, lack of holdings in Romania and stock selection in Bangladesh. Negative contributions were received from the lack of holdings in Morocco, stock selection in Nigeria and a correction in our only position in Turkey (3% of the portfolio at the end of the month). In what was a weak stock market, the Vietnamese FPT Corporation (the Fund’s largest holding) distinguished itself positively with an increase of 6%. The Vietnamese bank Lien Viet Postal Bank also rose in a declining market. Two of the Fund’s Bangladeshi holdings (Active Fine Chemicals and IFAD autos) also rose in an otherwise falling stock exchange. The largest negative contribution was received from the Egyptian vehicle assembler GB Auto (2.5% of the fund), which fell 27% after terminating the dealership agreement with Hyundai Motors in Iraq. In connection with the termination, a write-down of just under 30% of the value of its distribution operations in Iraq was booked, which overshadowed a result that was otherwise slightly better than expected. Since being one of the Fund’s largest holdings for a period, we have gradually reduced the position given the lack of progress in the vehicle business. Today, GB Auto consists of two parts: Distribution/manufacture of vehicles, and a financial services business (leasing operations). Based on the leasing business’s results during the fourth quarter, only this business is now valued at around 4x the total market value of GB Auto. We understand the market’s scepticism towards the automotive business given that the Egyptian passenger car market is at about half of sales from what is was 4-5 years ago. At the present time, however, the market seems to assign a strongly negative value to this part of the company, which seems excessive. After the falling share prices during the month, the P/E valuation of the Fund as a whole is P/E 7.1x for the current year.

MSCI FMxGCC Net TR (SEK) fell 6.1% during the month, compared to MSCI FM Net TR (SEK) which fell 4.9% and MSCI EM Net TR (SEK) falling 4.3%. The month was marked by an increased concern in regards to the coronavirus, or COVID-19 which is the correct name. A slowdown of the spread of the infection in China was long seen as a positive until major outbreaks in South Korea, Iran and Italy extinguished the hopes that the worst could be over. We saw strong reactions in equity markets whose countries were affected by the first cases, which created nervousness. For example, the Brazilian stock market fell 7% on February 26, when the first case was diagnosed. As everyone understands, the concern is not about the risk of death (for people under 60, COVID-19 is probably not much more serious than regular flu) but rather the impact on economic activity when factories are down and travel decreases. As things stand right now, it seems likely that the effects will also affect the second quarter of 2020. However, it should be borne in mind that deferred consumption over a few quarters will eventually need to be compensated for. Since investors should consider cash flows 30 years in the future, disruptions over a number of quarters are of limited significance, even more so if it is followed by a number of particularly strong quarters thereafter. However, as long as the unrest is there and the extent is yet to be determined, we can probably expect high volatility as new information is digested. It may seem cynical to speak of positive side effects in such a situation, but of course, the sharply lower oil price reduces the import burden and inflationary pressure for most of our markets. Among the markets the Fund has exposure to, only Nigeria is a net exporter of oil and gas. Lower inflationary pressures and lower economic activity further increases the likelihood of additional monetary easing, both in the US and in our markets. For once, we feel that worries have been greater in developed stock markets. While emerging and frontier markets have 5 pretty tough years behind them, the US has ten years of next to uninterrupted bull market behind them.

Over the next 8 months, the US presidential election is gradually getting closer. Most people are unlikely to sympathize with Trump but the investors in the US equity market do not have much to complain about, with the reduction of corporate tax from 35% to 21% in 2018 as the icing on the cake. Will it be a continuation for Trump or will we get another president who may advocate a more balanced economic policy, and how does that affect profit expectations? From a historical perspective, the years 2009-2019 were fantastic for the US stock exchange with average profit growth of the S&P 500 of 10% annually. This can be compared to around 2% during the period 1999-2009. It is also significantly higher than emerging markets (see attached image). An expansionary monetary policy in the wake of the 2008 financial crisis and extremely low interest rates are likely to be important reasons. Direct effects in the form of lower financial costs and the possibility of higher gearing, indirectly through increased room for repurchase of shares. Of course, the tax cut in 2018 has not been damaging either. The question that investors must ask is whether US corporates can maintain their higher EPS growth for the next ten years. Few emerging markets (if any) have implemented an expansionary monetary policy to the extent that the United States has done these past ten years. Investors’ expectations in emerging markets are modest after a number of unexciting years. At the same time, there is significantly more dry gunpowder left for stimulus as these markets on average are significantly less indebted. It will be interesting to see the outcome of the EM/S&P500 EPS growth at the end of 2029.

An Egyptian holding, Juhayna Food Industries, was divested during the month due to financial considerations.

No companies were added to the Fund in February. 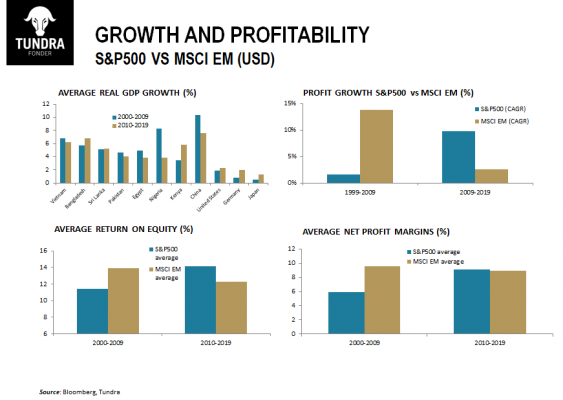 Growth and profitability US vs Emerging Markets.