The Fund fell 4.2%, compared to MSCI Pakistan IMI Net TR (SEK), which fell 7.1% during the month. Our underweight in Financials and Materials (mainly Fertilizers) had the biggest contribution of positive relative returns. Due to a sharp decline in interest rates and secondary market yield reflecting another 50-75bps rate cut led to the bearish sentiment towards the banks. Investors resolved to take profit in fertilizers after a decent run-up in the previous month. Additional positive contributors were our off-benchmark bet in pharmaceuticals, mainly Abbott Laboratories, as the healthcare sector is a beneficiary at large during the corona pandemic. The Fund also generated alpha from our bet in the Information Technology company, Systems Limited, which rose due to an increase in demand for IT services.

No major changes were made in the Fund in May.

During the month, MSCI Pakistan IMI Net TR (SEK) declined by 7.1%, MSCI FMxGCC Net TR (SEK) increased 4.2%, and MSCI EM Net TR (SEK) fell 2.8%. Posting a decent return in April, the market seems to be in a consolidation and profit-taking mode. Roughly half of the negative return in May is attributed to the Swedish Krona strengthening against the greenback. Local investors were net buyers in the market, absorbing outflows of foreign investors, which sold USD 40m during the month. As May was the month of Ramadan and Eid holidays, which is usually a dull period for the Muslim world amid strict lockdown for most of the month, we saw lower economic activities and market participation. Average daily value traded was down 8% M/M in May as a result. Pakistan kept its emerging market status in the MSCI review as the agency seem to be holding off any decision and appear to be cognizant of the unusual market situations due to the pandemic.

The government removed the lockdown in the last part of May, just before Eid celebrations. The eased restrictions for the tourism industry and transportation might increase the number of infected and poses a risk that the government reinitiates in order to protect the healthcare system.

The central bank slashed the policy rate by another 100bps in May as inflation showed signs of a slowdown. This is the fourth time since mid of March that the central bank cut its policy rate from 13.25% to 8%. Although the inflation stood at 8.2% for May and the real rate spread has become negative compared to positive real spreads for the last few years, the central bank seems to be shifting its reactive approach to proactive in light of the risk of further deteriorating economic conditions.

The Current Account for April’20 posted a deficit of USD 572mn. This deterioration was led by a decline of 30% Y/Y in export receipts (mainly in textile goods) compared to imports declining 26% Y/Y. However, on a year-on-year basis, Pakistan’s Current Account Deficit is still down by a massive 51% in April’20. Despite a slowdown in the Middle East, the remittances were up 1% Y/Y in May, likely due to Eid related inflows from expatriates to their families.

June is an important month as the country’s financial budget will be presented on the 12th of June and the government’s priorities will be revealed towards rejuvenating the economy in response to the COVID-19 aftermath. As rumors and news flow suggest, the upcoming budget is likely to offer relief to the impacted industries to minimize the impact of the pandemic. It is expected that the government would envisage the tax collection target of PKR 4.8-5.0tn (10-13% lower than the current year’s initial target) for FY21. The budget is also expected to rationalize sales tax and customs duties to improve competitiveness and promote localization in the economy. The finance minister has categorically denied any additional taxes in the next year’s budget.

Apart from COVID-19, Pakistan is expected to face a second wave of the desert locust attack in June/July, which has already severely impacted the agriculture output in Pakistan and neighboring countries.  The government seems to be preparing adequate arrangements to minimize the risk of crop damage with the help of China and international agencies.

Pakistan and the IMF have resumed talks for the second review under EFF. We believe, given the hardships faced by the country due to the pandemic, IMF will show leniency towards aggressive tax collection and reform targets in this review. Any positive conclusion in this regard would not only improve investors’ sentiments but also restore confidence in the exchange rate stability. 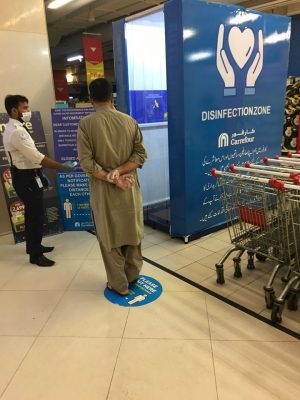 Megastore following government’s SOP of sanitization upon entering the store.