The Fund fell 1%, compared to MSCI Pakistan IMI Net TR (SEK), which fell 2.9% during the month.

The market continued to be in a consolidation phase in the absence of triggers. Information Technology and Healthcare sectors, however, managed to get investors’ interest in anticipation of better earnings during the COVID-19 crisis. Our off-benchmark bets in Information Technology, represented by Systems limited and Healthcare (Abbot laboratories and AGP limited) were the main positive contributors to the Fund’s performance. Our underweight in Energy companies also added to the positive relative performance. Negative contributors were Utilities (Karachi Electric) and Materials, mainly cement and steel names.

No major changes were made in the Fund in June.

During the month, MSCI Pakistan IMI Net TR (SEK) declined by 2.9%, MSCI FMxGCC Net TR (SEK) decreased 0.6% and MSCI EM Net TR (SEK) increased 6.1%. June is normally a month of lackluster participation in the market, as investors await the financial budget for the next year and the government’s economic strategy. Foreign investors remained net sellers in the market and sold USD 46m (USD 285m in Fy20) during the month. However, local investors continued to carefully build exposure in selective sectors, such as Healthcare and Information Technology. The average daily traded value stood at USD 41.2m.

In June, the government presented the Fy21 financial budget for the country. The government targets revenue growth of 19.4% with a fiscal deficit of 7% and a primary deficit of 0.5% of GDP. The GDP growth is expected to be 2.1% in Fy21, compared to -0.4% in Fy20. Considering the COVID-19 led economic challenges, the government refrained from imposing new taxes in the budget, and the majority of the growth is envisaged through economy reverting to the pre-corona levels. The budget was largely market neutral, however, multiple measures were adopted for the revival of the construction industry to rejuvenate the stagnating economy. Petroleum prices were jacked up by 27-34% to pass on the increase in global oil prices to the consumers.

Surprisingly, the state bank slashed another 100bps in the policy rate during the month to spur economic growth. This brings the cumulative monetary easing of 625bps since March’20. The real interest rate spread now stands negative, as the latest inflation reading in June came out to be 8.6%. However, the state bank forecasts inflation to decline further. In addition, the state bank through other policy measures has deferred and restructured loans worth over USD 4bn in the past couple of months to support the economy. Pakistan received USD 3bn loans during the month from multilateral/bilateral sources which are likely to take the state bank reserves to USD 12bn from USD 9bn.

The latest current account numbers released show a surplus of USD 13m in May’20 compared to a deficit of USD 1bn in May’19. The import bill contracted by 41% Y/Y while exports were down 40% Y/Y. Flattish inward remittances by overseas Pakistanis also supported the current account balance.

In FATF’s virtual plenary meeting, Pakistan was provided a four months extension in the deadline to submit a report on the required actions asked by the committee. The next meeting is scheduled in October this year, where Pakistan is expected to present progress on remaining action items to the review committee.

After completely easing lockdown since May, Pakistan has now adopted a cluster-based lockdown approach in the hotspots where cases exceed a certain threshold. Business activities, at large, are affected by the smart lockdowns to a very limited degree. The result season will start from July, starting with index heavyweight banks and fertilizer companies. We expect earnings to take a hit due to lockdowns and minimal economic activities during the 4q (April-June). The stock prices already seem to have priced in the dip in earnings, however, below/above expected results are likely to have an impact on the stock prices. 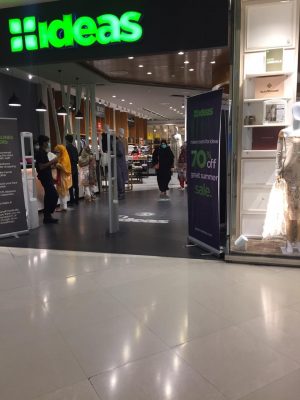 Shopping activities, in one of our holding company’s outlet, gradually picking up as lockdowns lifted.