The Fund rose 21.7% in April, compared to MSCI Pakistan IMI Net TR (SEK), which rose 18.4%. Our overweight in cyclical stocks, primarily the cement sector, paid off during the month and contributed 3% to the relative performance. Most of these companies have expanded in recent years and have fairly high leverage. The central bank’s decision to lower the policy rate was therefore seen as a strong positive. Another positive contribution came from the Healthcare sector (+2-points contribution), mainly pharmaceuticals. Abbott Laboratories (a subsidiary of the US-listed company with the same name) rose nearly 50% as investors increased their exposure to one of few sectors not significantly impacted by the decline in demand during the pandemic. We also noted a strong contribution from our only position in the IT sector, Systems Ltd (+2%-points), which rose just over 30% during the month. The largest negative contribution was received from our underweight in the energy sector (-3%-points), which recovered sharply towards the end of the month. In April, we sold our smaller position in Hum Networks after a very strong run-up during the month.

In April, MSCI Pakistan IMI Net TR (SEK) rose by 18.4%, MSCI FMxGCC Net TR (SEK) rose by 5.4%, and MSCI EM Net TR (SEK) rose by 6.7%. After a painful and turbulent March, the market found some solace and recouped half of the losses of the previous month. The recovery was led by local participants as more supplementary details regarding the government’s policy response to save the economy from the COVID-19 crisis were released. In an emergency meeting, the central bank decided to cut the policy rate by another 200bps, which took the market by surprise and fuelled positivity among the participants. Also, the renewed commitment by bilateral and multilateral institutions to support less developed economies and hope for lockdown-easing measures in the West snowballed optimism through the last week of the month. Nevertheless, foreign investors remained net sellers in the equity market and sold USD 69mn (USD 199mn FYTD) in April.

On April 16th, the central bank, in the view of extraordinary circumstances amid the COVID-19 crisis, decided to lower the policy rate by another 200bps to 9%. To recall, in March, the Bank slashed the policy rate by 225bps which leads to a cumulative easing of 425bps over the past two months. We view the latest action by the central bank to support growth and employment prospects in the midst of the virus shock. Furthermore, the Bank revised down the growth outlook for FY20 and FY21. The revised estimates suggest that the economy would contract by 1.5% (+3.0% earlier) in the current fiscal year before recovering around 2% growth in FY21 (surprisingly, similar growth projections were also mentioned in the IMF Country Report which was published on the 17th of April). The IMF, which was thought to approve the 3rd tranche under EFF (Extended Fund Facility) in April, instead approved a USD 1.39bn loan to Pakistan under RFI (Rapid Financing Instrument) to meet additional external financing needs arising from the pandemic in FY20. In addition to this, the IMF and Pakistan have agreed to resume fiscal consolidation under EFF as soon as the adverse effects of the exogenous shock to the economy subside. The availability of the latest funding from the IMF together with lower capital outflows has supported the local currency and FX reserves, which appreciated by 3.1% MoM and 10.8% MoM in April.

The economic data points available for March exhibit a slowdown in sales across several sectors in the economy on the account of imposition of partial lockdown (effective from the 23rd of March). The demand for Petroleum/Oil/Lubricants, Cement, and Cars was down by 9% MoM, 20% MoM, and 43% MoM, respectively. However, the performance of the external accounts remained satisfactory as the impact of a slowdown in the global trade would transpire in the April and May data. The Current Account Deficit (CAD) for March registered at only USD 6m, down by 99% YoY and 97% MoM, primarily supported by lower imports (-20% YoY) and higher remittances (+9% YoY).

The latest CPI reading for April displays that inflation is down to single-digit and registered at 8.5% YoY compared to 10.2% YoY in the previous month. With the announcement of a generous cut in petroleum prices effective from May, the market expectations for another 100bps cut in policy rate have increased for the ongoing month. Excluding this, we expect the market participants to carefully dissect the April trade data and remittance figures. Also, there has been consultation within the government quarters to expand the fiscal response to harmonize with an aggressive monetary policy; any news on this regard is expected to improve sentiment. Furthermore, the development regarding COVID-19, both domestically and internationally, is likely to question the assumption behind the recent market recovery.

On the 12th of May, we expect the MSCI rebalancing to be announced. Currently, only OGDC (and just barely) fulfil the market capitalization rule of USD 1 551m whereas Habib Bank (HBL) falls short, even including the 2/3 of the market capitalization index continuity rule. MSCI does not want to stir around too much, however, and is allowed to replace one of the necessary three constituents with another stock from its Pakistan IMI index. This means that Engro Corp could potentially replace HBL. Even though we believe it would be better for foreign flows if Pakistan was moved back into the frontier category, we believe it is unlikely that Pakistan is put up for review at this point in time. Should it be the case that Pakistan was moved back into the frontier category, the effective date would most likely be in 2 years’ time.

Depending on the exact dates of Eid (and the holidays associated), we can expect Current Account figures to come either a little early around the 18th– 19th of May or late around the 27th– 29th of May. Normally CA numbers are published around the 20th of every month (last month it was delayed till the 23rd of April). We have previously expected a small surplus. Post the PBS trade deficit numbers on the 5th of May, where primarily imports were surprisingly high, this number will be awaited with interest.

Sometime mid-May we expect SBP to hold its scheduled policy rate meeting. After a total of 425bps lower policy rate in March-April, estimates in the market are unusually divided. The more optimistic camp hopes for a 100bps lower rate (from the current 9%). 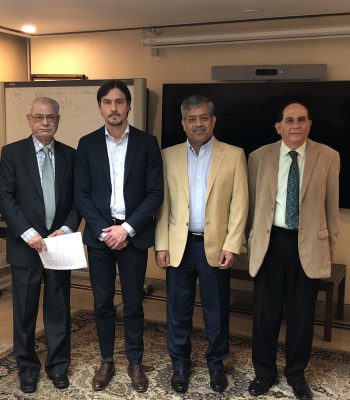