In October we turned more positive on the Kenyan banks as we see a stronger probability for the rate caps to be removed in combination with attractive valuations. Since the introduction of the rate cap in the second half of 2016, the banks have traded sideways due to profit growth halving. The economic growth in Kenya has also stalled since the cap essentially stopped lending to SMEs as the banks were unable to price the loans in accordance with the risk associated with them. While the economic effects have been quite clear to the majority of stakeholders, there’s been a strong political backing for the cap to remain in place for political reasons (i.e. voter perception of them being consumer-friendly/protective). Earlier this year the Supreme Court, however, ruled that the rate caps were in violation with the constitution and in the process of reworking them, President Kenyatta rejected the proposed amendments and instead suggested a full repeal. This was interpreted as he now was confident to get enough votes in parliament to remove the rate caps. This will be positive for Kenya’s and the banks´ growth outlook going forward.

We bought approx. 2% each in market leaders Equity Group and KCB Group, financed by decreasing our exposure in some of our Nigerian banks. The timing of our re-entry into Kenya turned out great in the short run as both stocks rose approx. 20% shortly after our purchases.

The Egyptian market (Hermes Index +1.3% in October) stabilized in October as the protests last month haven’t escalated into anything material and we head into earnings season. Consumer companies like Juhayna (dairy) and Obour Land (dairy) have reported better than expected profits and the market giant Commercial International Bank also came in ahead of expectations. Profit growth for our holdings that have reported averaged 30% for the third quarter 2019 vs 2018, while sales increasing 17% on average. Inflation continued to fall, 4.8% in September vs 7.5% in August, on slowing vegetables increase as well as base effects. Inflation is expected to pick up again towards the end of the year as the base effects mitigate.

The Nigerian stock market (Nigeria Stock Exchange Main Index -6.6%) couldn’t find any support with low liquidity with plenty of sellers but no buyers. Lack of economic progress continues to haunt the markets, and while stocks are cheap (Nigeria Stock Exchange Main Index trades close to ten-year low) the lack of trigger dampens the mood. All the banks in our portfolio have now reported satisfactory nine months earnings with bottom-line growth between 5-45%, Access Bank and UBA growing the fastest. NPLs showed a positive trajectory and decreased across the board, while cost inflation was more of a worry that we need to track going forward. On average the companies have reported profit growth just shy of 30% on 12% revenue increase for 3Q 2019 vs 3Q 2018.

In Kenya (Nairobi All Share Index + 8.3%), contrary to what we wrote last month, President Kenyatta surprisingly sent back an amendment of the rate cap law asking for a full repeal instead. The market took that as an indication that he had got enough support in parliament for that to happen and rallied, led by the financial stocks. The repeal was approved on November 5th, or technically it was not rejected as 2/3 of legislators were not opposed to the repeal. The new regulations will not affect outstanding loans so it will take some time for the impact to feed through in the banks’ earnings statements. 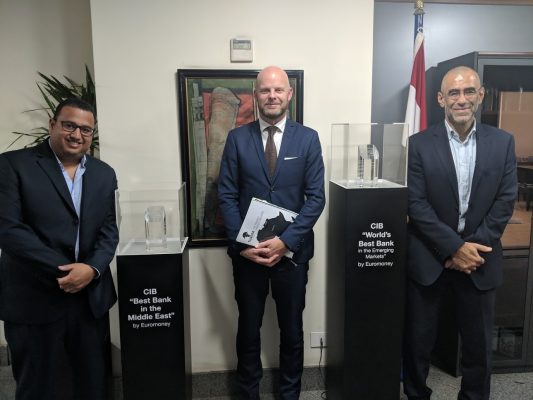 Tundra’s Mathias Althoff meeting the management of Egyptian bank Commercial International Bank, one of the larger holders in the Fund.