Looking back at the year of 2019 we are not satisfied with the relative performance of the fund. Almost half of the underperformance comes from our structural in the Egyptian bank CIB underweight (with almost a 20% weight in the benchmark while the fund cannot hold more than 10%) which rose more than 65% in SEK last year. Not holding Kenyan telecom operator Safaricom or Moroccan Maroc Telecom cost another 7%-points. Our positions in e.g. Credit Agricole Egypt did not fully compensate for the underweight in CIB, but still added approx. 3%-points to the relative performance. Our large overweight in Nigerian Access Bank (6% weight in the fund) and Egyptian Cleopatra Hospital Group (4%) paid of nicely adding more than 5%-points. We note the weak interest in Frontier Markets in general, and Africa in particular in 2019. With poor macro outlook and low visibility in major African markets like South Africa and Nigeria at the same time as developed markets did so well (MSCI World Net rose 34% in 2019) investors where not attracted enough by the cheap valuations.

In December, the African markets (MSCI EFM Africa xSA Net TR +1.7%) matched other Frontier markets (MSCI FMxGCC Net TR), which also rose 1.7% during the month. BRVM (a joint exchange for e.g. Senegal, Ivory Coast and Benin) was the best African stock market rising 9.9% followed by South Africa, which rose 7.5%. Zimbabwe was the worst African market declining 7.6%, while Nigeria was the second-worst performer, falling 4.7%. For the full year Zimbabwe was the best performing market (+62.4%) followed by Kenya (+29.9%), while at the other end we find Zambia being the worst market (-20.2%) closely beaten by Ghana (-19.1%). (all changes in SEK).

The Egyptian market (Hermes Index -2.5% in December, +16.1% in 2019) recovered some of the initial fall early December, but still ended in negative territory in the last trading month of the year. Lack of positive triggers and lower trading volumes dominated the market mood. Inflation numbers for November and December surprised with smaller increases than expected, as inflation rose from 3.1% in October to 3.6% in November and then 7.1% in December. Expectations were closer to 8% in December.  For the full year we saw the biggest market move in February and then mostly sideways even though rate cuts came sooner and more aggressive than expected  (helped by lower inflation) throughout the year. The main lending rate was lowered from 17.75% at the start of the year to 13.25% at the end in four steps. The market expects another 1-2%-points in 2020 which should help capex lending growth and kick off the next leg of economic recovery after the devaluation in November 2016.

The Nigerian stock market (Nigeria Stock Exchange Main Index -4.7% in December, -5.2% in 2019) didn’t show any real enthusiasm and ended up in negative territory for the month as well as for the full year. The initial election excitement in the first quarter of 2019 quickly vanished together with any hopes of any major reforms needed to boost the economic growth. Instead the market has very little expectations and has put valuations at 10 year lows. We’ve seen a pick-up in market turnover as well as stock prices from October when the centralbank changed the participation rules for the OMO-auctions. Maturing OMO bond liquidity have since sought returns elsewhere and have pushed bond yields down significantly from ~14% to below 4% for shorter durations. We’ve also seen a noticeable pick-up in interest in the stock market at the start of 2020, but it remains to be seen how long lived it will be. President Buhari approved the 2020 budget in record time when he signed it in mid-December. The 2020 budget assumes a budget deficit of 1.5% of GDP as expenditure amounts to USD 29bn (+15% vs 2019 budget) and assumes an oil price of USD 57 per barrel of oil and a 2.2 mbpd oil production. The most noticeable funding increase was a change in VAT from 5% to 7.5%.

In Kenya (Nairobi All Share Index +3.2% in December, +29.9% in 2019) we hear of smaller banks upsetting the centralbank as they tried to adjust their lending rates too aggressively after the interest rate cap removal. It strengthens the view that the positive effects of the rate cap removal will be coming gradually. GDP for third quarter of 2019 grew by 5.1%, slower than 5.6% in the second and lower than the expected 5.8%. The mentioned rate cap removal will help restore economic growth. 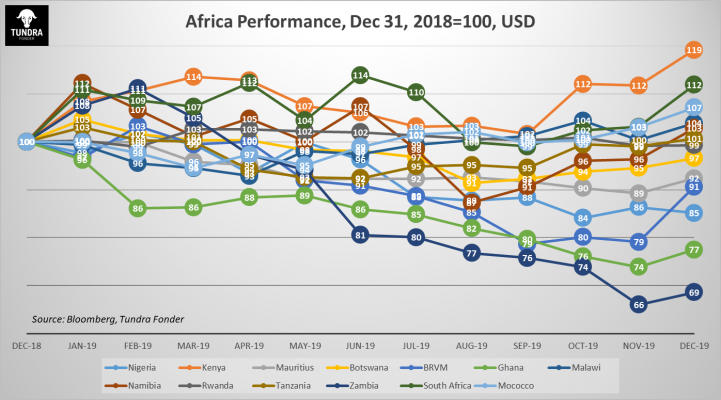 Stock market performance in Africa in 2019.