MARKET
The new currency regime in Nigeria is gaining a higher level of acceptance from global investors and turnover in the Investor & Exporter FX Window continues to be quite good. The Naira has continued to strengthen. The stock market, however, was dominated by profit taking ahead of results. Most banks continue to deliver strong profit growth, but the market reaction was muted and focused more on increases in operating costs as well as increased NPLs (mostly related to Etisalat/9mobile). Several banks increased provisions for their exposure to 9mobile. The outcome is still unknown. At least one of the banks indicated strong interest in assets from other industry players, which might lead to write backs at a later stage. President Buhari returned to Nigeria after 3 months of sick leave in the UK.
The Egyptian economy continues to adjust to a new reality after the devaluation in November 2016. The government raised prices for water, sewage and bus fares by nearly 50% during the month. The trade deficit decreased by 46% to USD 13bn, and foreign exchange reserves rose to USD 36bn. Further improvement of the trade balance is expected next year with gas production from the Zohr fields coming online turning Egypt into a net exporter of gas instead of an importer. Tourism recovery is also showing encouraging signs with the number of tourist arrivals increasing by over 50% to 3.5mn in the first six months.
The Kenyan stock market almost reached an all-time-high after incumbent president Kenyatta was declared the winner in the presidential elections held on August 8th. The worries of post-election violence as in 2007 were proved wrong, even though there were some incidents with fatal outcomes. Odinga, the opposition leader, questioned the result and appealed to the Supreme Court to overturn it. On September 1st, the Supreme Court surprisingly decided to annul the election results. New elections will be held on October 17th. This is likely to lead to some turbulence most likely in early September. According to Population Reference Bureau, an international organisation, Kenya’s population grew by 4.3mn people in a year, and reached 49.7mn in total. The population is expected to double by the year 2050. Earnings season is ongoing in Kenya and all major banks have released their numbers. After many years of fast loan growth we are now seeing the effects of the interest rate caps introduced last fall. Growth was in some cases negative and NPLs are on the rise, the stock market however took little notice of this.
Ghana’s macro outlook continues to improve. Inflation fell further in July (to 11.9% from 12.1% in June). The government has renegotiated the terms for the current IMF program. President Nana Akufo-Addo, who took office in January 2017, sought a 1-year extension due to the USD 1.6bn hole found in the budget shortly after taking office. The IMF decided to Ghana an extension. The Ministry of Finance now expects the economy to grow by over 9% in 2018 as a result of the economic recovery.

THE FUND
The fund was unchanged in August but performed better than the benchmark, MSCI EFM Africa ex South Africa Net Total Return Index, which fell 2.3%. The best market in Africa was Malawi rising 17.1% followed by Zimbabwe (+12.1%). Africa’s worst performers were Nigeria (-10.7%) and Botswana (-8.6%). The main contributions to the excess return in the fund came from our Egyptian overweights in Consumers and Healthcare. Our overweight in Nigerian financials as well as our underweights in Kenya were the main negative contributors. On August 1st, MSCI decided to change the source for the currency in Nigeria to NAFEX (a switch we made in May), leading to a big drop in the benchmark index on the day.
During the month, the fund increased its holding in Obour Land, an Egyptian consumer company, after showing a strong set of numbers for the 2nd quarter. The volume drop in sales was less than expected despite their price increase. Turnover increased by 43% and net profit by 28%. Most consumer companies have seen their customers switch to lower priced items (often from competitors) as a result of price increases. However, Obour Land’s numbers indicate a higher degree of consumer inelasticity which should pay off even more when consumption picks up again. 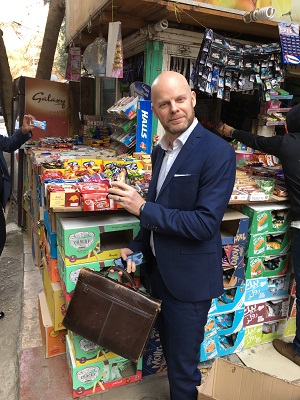