The fund fell 0.6% in USD during the month (+2.6% in EUR), compared to MSCI FMxGCC Net TR (USD) which rose 0.3% (EUR: +3.6%) and MSCI EM Net TR (USD) which fell 1.5% (EUR: +1.7%). In both absolute and relative returns, most of the returns came from our two largest markets, Pakistan and Vietnam, where sub-portfolios rose by around 3% each. Primary negative contributions were received from our positions in Morocco, Egypt, and Bangladesh as well as lack of holdings in Kazakhstan and Romania. Among individual holdings, Pakistani Systems, Vietnamese Lien Viet Postal Bank and Pakistani Meezan Bank made the largest positive contribution. The largest negative contribution was received from Indonesian Media Nusantara, Bangladeshi Square Pharmaceuticals, and Moroccan Hightech Payment Systems. No holdings were sold or added during the month. During the month, we participated in our first Sri Lankan IPO. We have subscribed for shares in Windforce which is the leading renewable player in Sri Lanka, and one of few listed alternatives within the frontier universe. The company is currently active in wind power (7 plants), solar power (10 plants) and hydropower (10 plants). In addition to Sri Lanka, facilities are also operated in Uganda, Pakistan, and Ukraine. At our meetings, we were impressed by both the strong ownership base with a number of Sri Lanka’s most reputable companies on the list of owners, and we were very impressed by the company management that has taken the company to its current position over the past ten years. The company meets all three of our basic criteria – Structural growth, strong corporate culture and management as well as clear societal benefits – with flying colours. The company is listed on a P/E multiple of 7x, which we consider to be very attractive given the nature of the business and growth opportunities in the future. The IPO attracted a lot of attention and was oversubscribed 8x and will list later in April. We look forward to following the company as shareholders on their continued journey.

MSCI FMxGCC Net TR (USD) rose 0.3% during the month (EUR: +3.6%), compared to MSCI EM Net TR (USD) which fell 1.5% (EUR: +1.7%) and MSCI World Net TR (USD) which rose 3.3% (EUR: +6.7%). The US dollar strengthened just over 3% against the EUR during the month. The only index market that also rose in USD was Kazakhstan, where the index rose 7% in USD. The weakest development was noted in Bangladesh, which fell by almost 7% (USD). In the Tundra universe, which also includes some smaller emerging markets, Egypt (-10% in USD) and Indonesia (-7% in USD) also declined during the month. As can be seen in Figure 1 below, most of our markets have now undergone two months of consolidation following the strong recovery that began in the spring of 2020. There are sound explanations for this. Expectations of a stronger world economy have led to rising commodity prices, which in turn has led to rising inflation, which in turn has affected long-term interest rates worldwide. The US 10-year yield rose during the month from about 1.4% to 1.7% at the end of the month and the average ten-year interest rate in Tundra’s nine largest markets rose from 7.72% to 7.84%. A partial explanation for the relatively muted reaction of bond yields in our markets is the second partial explanation for the recent consolidation – Most of the economies in our countries continue to have quite extensive restrictions in place and the vaccination rate is much slower than in the richer countries of the world. During March, we saw how Pakistan, the Philippines, and Bangladesh increased restrictions to reduce the spread of infection and other markets are nervous too. Given that our countries do not have the monetary resources in the form of stimulus packages that can be used, like in the US or Europe, they react more to negative news about the spread of infection. Essentially, this is logical, i.e. “bad news is also bad news for the stock markets”. Not like in the western world where bad news rather is seen as good news, as the stock markets are primarily driven by hopes of continued stimulus packages. In our view, this leads to rather sober expectations in our markets, where none of our countries are expected to return to a normal growth rate as early as 2021, but increasingly investors’ focus is shifting towards 2022 and onwards. This may sound pessimistic, but it will probably also mean that the central banks, whose only weapon is the interest rate level, will be careful to raise rates too quickly. This may provide support to the stock markets. From a valuation perspective, most of our markets look very cheap compared to global equities in general and the United States in particular (see Figure 2). Experienced investors know that 8-12% per year is a normal stock market return over time, not 15- 20% as has been the case in the US in recent years. For those who still believe that the stock market is the right place to be invested, frontier markets and smaller emerging markets thus look like a good alternative from a risk-reward perspective. 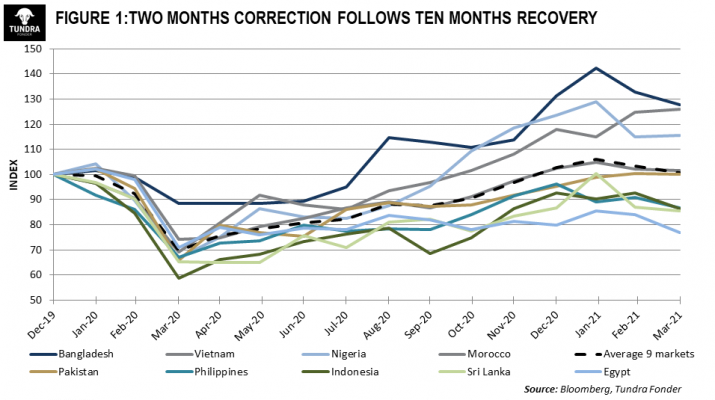