The Fund fell 28.5% during the month, compared to MSCI Pakistan IMI Net TR (SEK) which fell 28.2%. It was the single worst month since the financial crisis in 2008 and given that the downturn occurred in the wake of global unrest, it hit relatively evenly across all sectors. Our underweight in the energy sector was the biggest positive contribution while our overweights in Healthcare, IT, and Consumer Discretionary contributed negatively. No new holdings were added nor divested during the month.

In March, MSCI Pakistan IMI Net TR (SEK) declined by 28.2%, MSCI FMxGCC Net TR (SEK) fell 19.2%, and MSCI EM Net TR (SEK) fell 12.9%. The market performance was reminiscent of 2008, where it almost lost one-quarter of market capitalization in a single month as COVID-19 spread in the west part of the world in an uncontrollable manner. The demand for safer assets resulted in foreign selling in both the domestic debt and the equity market. Also, the collapse of oil prices, which favors inflation and the current account outlook of Pakistan, led to massive selling in the index heavyweight names in E&P and the Banking sector by local and foreign investors. The cyclical names that relatively fared better in the first half of the month in the anticipation of a considerable cut in interest rate met with disappointment when the central bank reduced interest rate by 75bps. Later in the month, the subsequent cut in interest rate by 150bps (cumulatively 225bps cut in one month) as a part of the Economic Stimulus Package failed to instill the confidence back among local investors.

The global market rout that fueled a rush to safety resulted in a sizeable outflow of dollars from the domestic debt and equity market. In March alone, Pakistan saw a net outflow of USD 1.78b and USD 0.09b from debt and equity, respectively. These outflows pressured local currency and FX reserves, which dipped by 8.4% MoM and 12.3% MoM in March. As the bulk of the hot money already evaporated in March (approx. USD 1.33b is outstanding), we believe the risk to FX reserves from a capital flight is not so significant. We believe the central bank was wise not to try to protect the rupee by spending reserves as it was unlikely to help while most currencies outside the USD were under pressure in March. Also, to shore up FX reserves, the country has requested a USD 1.40bn loan from IMF on a fast-track basis. Similar kinds of requests are made to other international lending institutions to mobilize project-related funding to fight-off the adverse impact of a pandemic on the economy. These efforts are expected to yield approx. USD 3.60b of funding over the next few months. In addition to this, the reduction in import bill from lower commodity prices along with a partial suspension of economic activity is expected to outweigh the erosion in exports and remittances due to global economic slowdown and trade restrictions. Consequently, the savings from the current account are expected to support FX reserves in the short-run.

To limit the spread of the virus, Pakistan went into partial lockdown (effective 23rd March) that resulted in the closure of some businesses (mostly engaged in non-essential goods and services). Simultaneously, the authorities have announced monetary and fiscal measures to negate the effects of self-imposed economic contraction due to the pandemic. This Economic Stimulus Package aims at 1) to protect the vulnerable section of society via cash disbursement, 2) to prevent job losses by supporting formal industries, 3) to keep prices of essential goods under control through tax exemptions, subsidies, and large-scale procurement, and 4) to support businesses and households via deferred principal payment and utility bills, etc. The lockdown, which was expected to end in the first week of April, is now extended till the 14th of April. Taking the cue from government economic and disaster management planning, it seems that the government is ready to impose a lockdown until June (if necessary). Therefore, we do not rule out that the lockdown will continue until mid of May, if the situation warrants such action.

Economic gains under IMF programs have started to disappear amid the outbreak of the virus. The tax and non-tax revenues collection targets have become unattainable/irrelevant for this year. In March alone, the provisional numbers suggest that FBR (a tax collection authority) reported a PKR 200b revenue shortfall (versus cumulative PKR 270b in 8MFY20) due to a reduction in imports and economic activity. During the outgoing month, IMF has already exempted expenses incurred by the government to combat the virus would not be included in the fiscal deficit target. Therefore, we believe that the odds of revisiting the program targets between Pakistan and the IMF have increased significantly.

At the time of writing the March monthly letter, Pakistan announced incentives for the construction industry to spur growth and employment in the economy in the shape of amnesty and tax reduction. Also, the government has decided to exempt the construction sector (like the Agriculture sector) from a lockdown effective from the 14th of April to provide relief to daily wagers engaged in the sector. Having said that, the expectations in this regard have led to significant price movement in cement and steel names prior to the announcement.

Traditionally, the corporate result season begins in April; however, this time around the regulatory has offered relaxation for filing of financial statements. Therefore, in April, we expect that the market direction is likely to be dictated by global and local news flow. Among more significant events, the market will take interest in the current account numbers for March for indications whether lower commodity prices will outweigh lower remittances and lower exports. Information regarding an extension of the partial lockdown period will attract interest as well. There are also ongoing discussions among multilateral agencies on possible debt relief packages for less developed economies, which could potentially improve sentiment. Nervousness will remain in the market and the short-term movements will be unpredictable. It is worth highlighting that Pakistan equities now trade lower on P/BV than they did after the Global Financial Crisis in 2008 (see graph 1). It does not mean that markets cannot fall further short-term but it does say that investors’ expectations on future profits are at their lowest yet to be recorded. 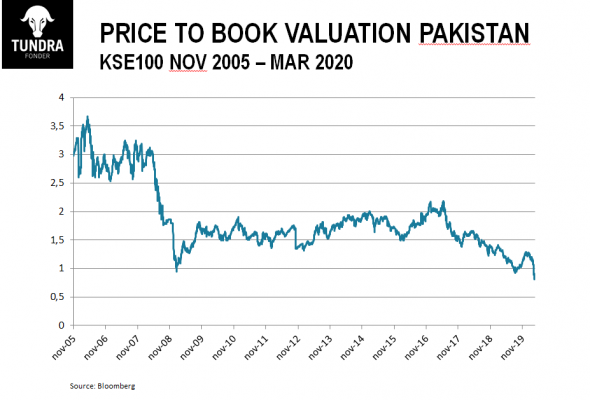