We focus on frontier markets because we see great opportunities in this asset class for a long time to come. Around 50% of the world’s population live in these countries and economic growth is significantly higher than in the developed world. A young and hardworking population combined with high productivity, creates a very attractive investment climate.

Learn more about Tundra’s definition of Frontier Markets, how we differ from the pack, and why we believe the fund can offer an exciting long-term upside and be a good diversification in the global equity portfolio in this report. Read about all the fund in the Full Prospectus on the Buy/Sell page.

We publish a monthly letter commenting on market developments and our funds. Read the latest as well as previous editions here. 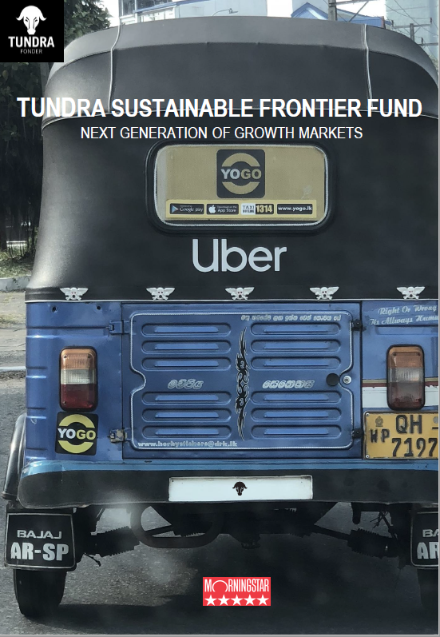 Capital invested in a fund may either increase or decrease in value and it is not certain that you will be able to recover all of your investment. Historical return is no guarantee of future return.

The Full Prospectus, KIID etc. can be found at Buy/Sell and the Annual and semi-annual reports can be found at Annual Reports. You can also contact us to receive the documents free of charge. Please contact us if you require any further information:+46 8-55 11 45 70.

A new generation of growth markets are emerging. Frontier markets are the next generation of emerging markets that include countries such as Vietnam, Bangladesh, Pakistan, Sri Lanka, Nigeria and Egypt. These are countries that come from a low level of economic development but which have undergone a transformation in the last decade and now are among the fastest growing economies in the world. Tundra’s definition off frontier markets are countries defined by the World Bank as low-income or lower-middle-income countries. These countries currently make up 50% of the world’s population, but according to UN estimates, by 2070 they will make up almost 67% of the population. Most of what we read about these countries is about the problems, but the fact is that between 2008-2018, the proportion of people living in extreme poverty in lower-middle-income countries decreased from 27% of the population to 11%. A new generation of workers and consumers are emerging. In the coming decades, a large part of the world’s factories, roads, hospitals, schools and shopping malls will be built in these countries. This suggests that economic activity will be higher than in the rest of the world. Tundra invests in the best companies in these countries that benefit from this development.

Economic growth in frontier markets is driven by: 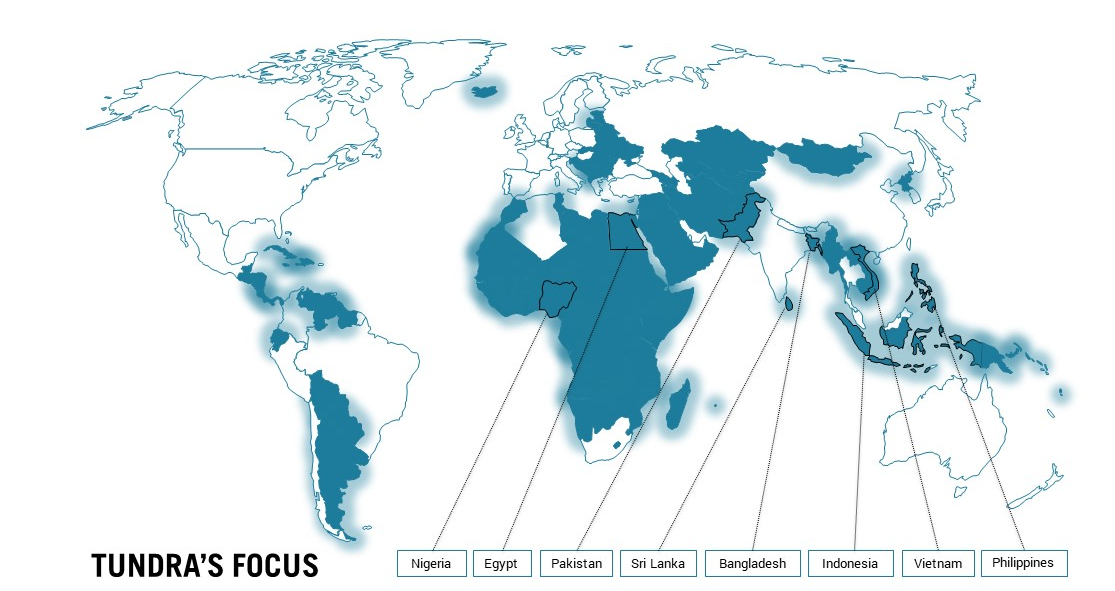 Frontier equity markets are still dominated by domestic investors. The number of foreign pension funds, insurance companies and asset managers which are active in frontier markets is limited. To a large extent, these markets are still uncharted territory. The limited number of foreign investors also means that frontier equity markets tend to be less analysed. For long-term investors it creates opportunities to find under-researched and undervalued companies that over time, as the economies grow, will attract more foreign capital.

Limited foreign investor participation also contributes to frontier markets having relatively low correlation with other equity markets and asset classes. Replacing a portion of a global equity portfolio with frontier markets can contribute to reducing the overall risk level of the portfolio while maintaining returns.

Tundra works proactively with these issues as part of our analysis.

Frontier markets have historically struggled with high gearing. This is no longer the case. Write downs combined with high economic growth have resulted in frontier markets today having a lower gearing (measured as external debt as a portion of GDP) than for instance the G7 countries.

Passive investment vehicles such as ETFs and index funds have grown in popularity during the past years. Frontier markets are less suitable for passive vehicles. Transaction costs are typically higher; they tend to lack a functioning futures market; indices rarely fully reflect the structurally most attractive investment opportunities. This is also frequently reflected in the poor relative return of passive vehicles investing in frontier markets and why there are substantial opportunities for outperformance created through active management.

Our investment selection is made in accordance with traditional fundamental analysis. Our funds are actively managed.

We have three key criteria that must be met in order for us to invest in a company:

Tundra Fonder has no restrictions on what proportion of the portfolios may be invested ”off benchmark”. This also means there will be times when we fall behind our competitors. Daring to take the risk of ”being wrong”, not only in individual quarters, but even years, is essential for success in creating good long-term returns, we believe. Tundra Fonder’s products are not for investors seeking short-term stable returns, nor a return in line with an index. Such investors are better off investing in one of the successful hedge funds or in an index fund.