The fund rose 10.3% (USD) in November (EUR: +7.6%), compared with MSCI FMxGCC Net TR (USD) which rose 7.9% (EUR: +5.2%) and MSCI EM Net TR (USD) which rose 7.6% (EUR: 4.9%). The excess return during the month was unusually evenly distributed on stock selections in Vietnam, Morocco, Indonesia, Bangladesh and Pakistan. Some positive contribution was also received from the lack of holdings in Kenya and Lebanon. Negative contributions were received from our positions in Egypt and Sri Lanka, as well as lack of exposure in Slovenia and Romania. Among individual holdings, the Bangladeshi pharmaceutical manufacturer Beximco Pharma stood out. The more liquid local share rose 35% (USD) while the depository receipt (listed in London, but trading at a discount to the local share) rose 70%. The rise came after the company announced that it had received the import rights for one of the COVID-19 vaccines, which are expected to be available in early 2021. We had the opportunity to meet the company at a virtual meeting at the end of November and are impressed with how well the company has managed the pandemic. The company has previously been criticized for excessive expansion, but now has the heaviest investments behind it, with plenty of room for growth for the coming years. During the first nine months of the calendar year, sales increased by 17% and earnings per share by 20%. After the year’s rise of just under 130%, the share is valued at around P/E 15x, which still does not seem strained given continued good growth conditions. Our newly acquired Indonesian healthcare company, Hermina Hospitals, was also one of the winners after a very strong quarterly report. Profit for the first nine months of the year increased by 24% (third quarter by 84%). The company is one of the companies that has marginally benefited from the COVID-19 pandemic as they have leased part of their bed capacity for the care of COVID patients, with slightly higher compensation than what they traditionally receive within the framework of the Indonesian health insurance system. In 2020, the company has so far opened two new hospitals and a third will open before the turn of the year. Two minimal positions (residual positions from the mergers) were divested in November. During the month, we increased our position in the Bangladeshi pharmaceutical company Square Pharma. The share, which was previously foreigners’ favourite share in the pharmaceutical sector, has seen itself completely bypassed by above mentioned Beximco Pharma in 2020. At the current valuation of P / E 11x, and double-digit profit growth over a cycle, the stock looks cheap at the moment. We believe it has been hit relatively hard by several years of outflows from frontier funds, and thereby providing us with a good opportunity to increase our position slightly. Together with two of our other portfolio companies, Systems Ltd (Pakistan) and Hermina Hospitals (see above), Square Pharma was recently named one of Asia’s 200 best companies (with revenue of less than USD 1 billion).

With just under a month left of 2020, our eighth year with the fund, we note that we are likely to generate absolute returns also in 2020, despite the fact that most of the markets we invest in have so far shown negative returns during the year. We have always argued that it is much more important to ensure that you invest in good companies than to “jump from tuft to tuft” between different markets. Successful stock-picking requires detailed knowledge of the markets in which you invest, which in turn requires limitations. Our focus is on the emerging markets that are currently lacking, or are marginally represented, in an ordinary emerging market fund but which have the potential to become major investment destinations in the future. In our report from last summer – “Next generation of growth markets” – we explain our investment philosophy. Please read the report here: https://bit.ly/3gp1v7F

However, our universe will change and evolve. During 2020, three new markets have been added to the portfolio: the Philippines, Indonesia and Morocco. We are gradually expanding our investment area and we expect this expansion to continue as long as we find companies that can compete with the existing portfolio companies, and provided that we can ensure sufficiently high quality in the selection process. In 2020 so far, a large part of our excess return has come from our stock selection in Pakistan and Vietnam. Pakistan is still down for the year and Vietnam marginally positive, but our sub-portfolios have returned around 50% (USD) each. However, it is gratifying to see that we have also received good contributions in Morocco and Indonesia, which are two new markets for the year (see chart).

It is hard to dispute the likelihood that growth in our markets over time will be higher than in other parts of the world. However, it is equally indisputable that not all companies are able to take advantage of the higher economic activity. Choosing the right company will continue to be a decisive factor for long-term good returns.

MSCI FMxGCC Net TR (USD) rose 7.9% (EUR: 5,2%) during the month, compared to MSCI EM Net TR (SEK) which rose 2.4%. The Swedish krona strengthened just over 5% against the USD during the month, which reduced the return in SEK correspondingly. Among the index countries, Slovenia and Romania developed the most, with gains of 24% and 16%, respectively, in USD. Lebanon (-4%), Senegal (+/-0%) and Bangladesh +1%) were the weakest. We have talked about the US presidential election as a more long-term trigger for reallocation to emerging markets. We note that this thesis still holds as flows to emerging market funds turned positive in November. If this proves to be a more sustainable phenomenon, a natural next step is for capital to seek out smaller emerging markets as well. These tend to react with some lag, but then a little stronger due to the lower liquidity. Since the turnaround this spring, our markets have recovered solely due to local investors repositioning from the bond market to the equity market due to lower bond yields. However, the majority of our markets remain in negative territory for the year as a whole. Anyone who read our monthly letters at the end of 2019 noted the optimism we expressed given historically very low valuations. COVID-19 got in the way but the fact remains. The last five years have been historically deplorable with economic crises, currency turmoil, political turbulence and, in addition, a fantastic development in the world’s largest stock market in the West. Investors have been disappointed and increasingly questioned whether the return potential relative to the risk level is worth an allocation to smaller emerging markets. Over longer periods, emerging markets have yielded significantly higher returns than developed stock markets, but this has not been the case for the past ten years. However, we now note that emerging markets have recovered some lost ground since last spring. As can be seen from the chart below, periods of excess returns and underperformance for emerging markets tend to be protracted. The last peak in relative returns was reached in October 2010, just over ten years ago. If this is a definite turnaround we see for the asset class, investors will probably have a longer period of good return opportunities ahead of them. 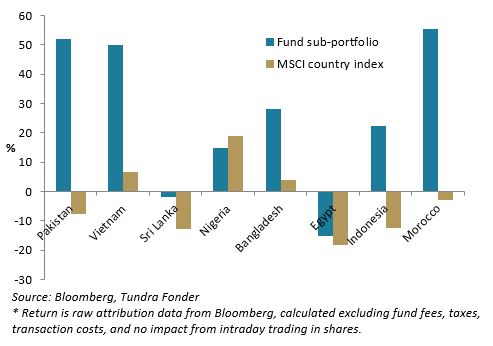 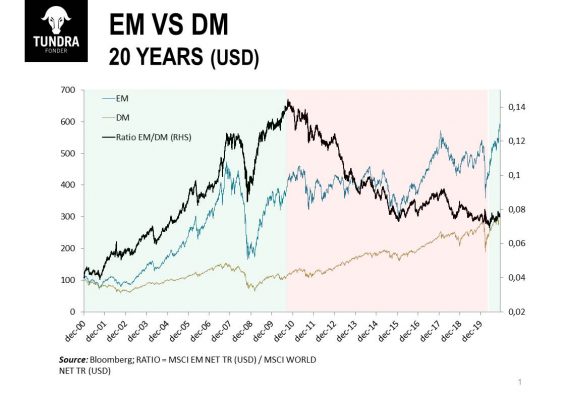