The Fund fell 20.7% in March, compared to MSCI FMxGCC Net TR (SEK) which fell 19.2%. It was a month where any excess return was primarily about what one did not own. We note that our overweight in Pakistan, where the sub-portfolio fell 27% during the month, was the single worst contribution while the absence of exposure in Morocco (fell 23.2%) was the single best. Two holdings were sold during the month: The Egyptian education company CIRA has been one of our best investments for the last twelve months and was sold due to the fact that we see greater potential in other holdings at current levels. The position was sold early in the month before the Egyptian stock market came down significantly. We also sold our position in Vietnamese Saigon General Services. The valuations remain low, but liquidity is limited and after the price movements in the market we can now find the corresponding potential with significantly better liquidity in other companies. We also reduced our position in Pakistan by around 2% primarily during the first two weeks of the month. Pakistan held up very well relative to other markets early in the month and the Fund’s weight became a little too high relative to our target of a maximum of 25% exposure to a single country.

MSCI FMxGCC Net TR (SEK) fell 19.2% in March, which can be compared to MSCI EM Net TR (SEK) which fell 12.9%. There is no other way to put it than concluding that March was painful. When markets are driven by fear the starting point of valuations does not matter and there was nowhere to hide in the past month. Least hit were Bangladesh (-9%) and Kenya (-13%), most other markets fell more than 20%.

We all know by now that the main risk with COVID-19 is not its fatality rate which is gradually being adjusted downwards as scientists catch up in their research. There are many other diseases that are killing infinitely more people every year. Neither is it the potential loss of 3-4 months of production. Keep in mind that in a traditional DCF-model losing 1 year of cash flows warrants 7-10% correction in the price of a stock. What has been priced in by the market is instead the risk of permanent damage to companies and economies due to an extended period of a halt of business activities and that the world economy falls into a depression.

The short-term standstill across global markets is unprecedented in many ways and the economic numbers in the months to come will indeed be brutal. The response from governments in terms of fiscal stimulus is however also unprecedented with at the time of writing more than 3% of the world GDP stimulus released. Usually, developed markets, with the U.S. in the front, have been more aggressive but now we have also seen it in less developed economies. Towards the end of March, Pakistan released a stimulus package worth above 2% of GDP and Egypt has announced a package of a similar relative size. We are likely to see more measures in the months to come. It appears that governments around the world, just like during the global financial crisis, understand the risks of the music stopping and will do everything in their power to prevent that. The first quarter numbers will be bad, second quarter likely even worse. It does seem likely however that the measures, already implemented and those that are likely to follow, will allow for most businesses to gradually resume normal business during the second half of the year.

For Tundra’s core markets the fears are similar. Young populations (average age around 25 years across our markets) are likely to mitigate less developed healthcare systems to some extent. Lower commodity prices will help the balance of trade for all but Nigeria and lower inflation will increase the room for further rate cuts. As we have said before, all of our markets but Vietnam start from very high levels of policy rates. The relief from lower interest rates had just begun and its continuation will be welcomed. Lower tourism revenue, falling exports and remittances (money sent back home from locals living abroad) will impact negatively. So will weak financials and thus the fact that there is less room for fiscal stimulus. Risk appetite for smaller emerging markets has been weak for several years. This means there is likely to be less foreign Selling of bonds and equities than during the global financial crisis. There is a justified concern that many less developed economies are risking a cash flow problem due to scheduled repayments of foreign debt, while revenue in the short term is substantially lower. It is encouraging to see that the G20 countries, the IMF and the World Bank have recognized this and are having discussions on payment facilitation for less developed economies to bridge this gap.  Provided  it is implemented in the near future it will mitigate the concerns. Nevertheless, we have seen the first round of currency weakness vs the USD across all emerging markets (to be fair among all markets outside U.S., including Sweden) and we are likely to see some more during the current risk-off mode. On a positive note but less talked about is the fact that corporates in our markets are more accustomed to handling disruptions in business activity and this can, in this case, prove to be an important advantage. It is particularly true for SME:s where a Pakistani restaurant owner is likely more prepared to handle 1-2 months of shut downs than his/her peers in developed markets. Such a risk was off the radar and as a result developed economies will be harder hit in this segment. As SME:s is the backbone for most economies we would thus expect that “re-starting” business activity will be easier in our markets than in developed markets. This can prove a relevant factor when it is time to turn the lights back on.

In terms of impact on equity markets, it is natural to compare to previous historic crises, where the 2008 Global Financial Crisis comes closest to mind. In the same way as 2008 the main fear is the risk of a complete and pro-longed stop in the world economy. A big difference versus the 2008 crisis however is the starting point of markets and valuations. For those that have followed us for a long time know that the last 5 years have been tough, especially relative to the U.S. equity market boom. Just before the COVID-19 pandemic, we talked about being on the cusp of a longer period of recovery where several of our markets were coming out of severe crises and were trading at historically low valuations. This is an important comparison when judging a more long-lasting impact. As you can see from picture 1, the 2008 crisis occurred after 5 years of a massive bull run in emerging and frontier markets. MSCI FMxGCC Net TR (USD) rose 300% between April 2003 until the end of March 2008 whereas the returns for the same benchmark during 2015-2019 was a negative 15%. It also means that valuations are completely different this time. As we can see in picture 2, the equity markets of Pakistan, Sri Lanka, and Nigeria all have to recover more than 100% just to return to the average of their valuations during the last 10 years. Bangladesh is not far behind with an 80% upside to the average and all of our markets are trading at significant discounts to their long-term averages.

We are not saying valuations are necessarily a short-term cushion when markets are driven by fear and hope, but we are saying they matter for long-term returns. We should be humble about the fact that we have a couple of tough months ahead of us. After already 5 tough years in our markets we are topping up with locusts and a global pandemic (reminds you of something?) and pushing expectations and valuations to complete despair. Calling the bottom in times like these is obviously impossible, but what should eventually follow on the other side is the bull market of a century.

An Egyptian company, Cairo for Investment and Real Estate Development (CIRA), and a Vietnamese company, Saigon General Service Corporation (SAVICO), were divested from the Fund due to financial considerations.

No companies were added to the Fund in March, 2020. 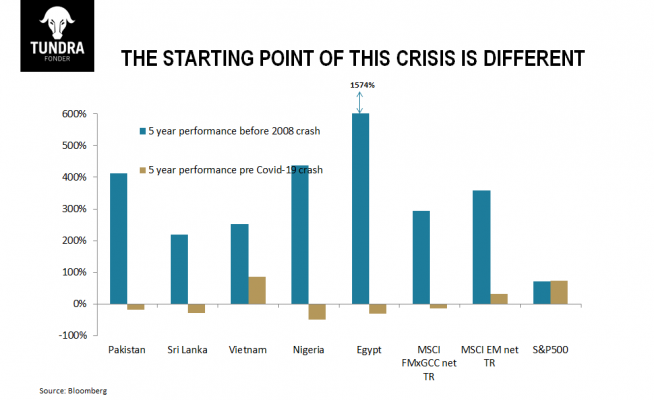 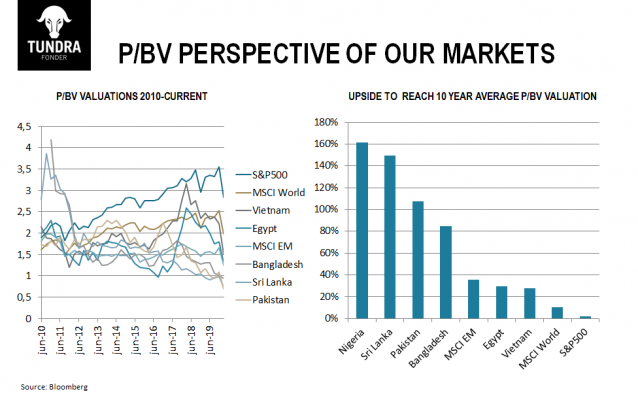