In USD the fund rose 0.5% (EUR: +0.7%) during the month, compared with the fund’s benchmark index which rose 0.1% in USD (EUR: +0.3%), and the MSCI EM Net TR (SEK) which rose 0.8% in USD (EUR: +1.0%). During the month, strong performance in our Vietnamese holdings outweighed significant corrections in our Sri Lankan and our Bangladeshi holdings. Our sub-portfolio in Vietnam rose just over 14%, while the local market rose 8% (USD). It is worth noting that in January the situation was the opposite, with Bangladesh and Sri Lanka acting as locomotives while Vietnam had a difficult month. This is a fairly typical outcome in frontier and smaller emerging markets where the correlation, month by month, is often low.

Among individual companies, the fund’s second largest holding, the Vietnamese IT-company FPT, excelled with an increase of 22% (USD). The company rose after the announcement of the result for 2020. In 2020, sales rose by 8% to the end, while earnings per share rose by 12%. The result came in slightly higher than expected. What mainly caused the price increase was instead the unexpectedly strong forecast for 2021. The company’s now largest business area, software outsourcing, is expected to grow 20-25% in 2021 with rising margins due to a higher knowledge content. Recently, they won a major contract in the ASEAN region of USD 100m and they have now set up offices in both India and Costa Rica to better serve American customers. The telecom/broadband operations, approximately equal in revenue as the software outsourcing, are expected to grow by about 15%, while the still small educational operations (primarily IT universities) are expected to grow by 30- 40%. The company expects to increase the number of employees in the software outsourcing business area by 25% in 2021. FPT’s in-house IT universities support this goal. After the rise, the share is trading at around P/E 15x for 2021, which still seems conservative for a fast-growing and (more unusually) profitable IT company in one of the world’s fastest economies.

The fund’s largest holding, Pakistani IT company Systems Ltd, also reported full-year figures shortly after the turn of the month. Sales rose 31% in 2020 while earnings per share rose 37%. The result was marginally higher than expected. As expected, the gross margin came down during the fourth quarter, given the stronger rupee (80% of the company’s sales are exports), but this was offset by higher growth. We have had two meetings with the company in recent weeks. The company expects to maintain a growth rate of 20-30% in the coming years, while maintaining slightly higher margins

given continued higher growth abroad, where profitability is higher. The valuation for the current year is now 22-25x earnings, significantly higher than the market as a whole (P/E 7x) but still modest in an international comparison. Pakistan’s IT exports per capita need to increase more than 15 times to catch up with India and Systems Ltd is today the leading IT exporter with good prospects of maintaining this position.

Sri Lankan Sampath Bank was the loser of the month with a decline of 24% (USD), a likely reaction after the January bull run (+ 50%), but also as a result of the weaker local market. Our Egyptian dairy and juice producer Juhayna fell 18% during the month. On February 7, the company’s CEO Seifeldin Thabet was arrested by Egyptian authorities on charges of involvement with the banned political party, the Muslim Brotherhood. Ironically, we pointed out this particular risk while describing the investment in our latest monthly report. We sat down with Juhayna’s investor representatives during the month. Although it is of course not possible at this time to determine to what extent the company will be affected, we maintain our view that it is unlikely that minority owners in the company will be negatively affected. In the short term, this type of event has created justified concern and the reaction in the share price is understandable. We have a position of about 1.5% of the fund’s assets in Juhayna and see no reason to change this until we see a clearer way forward.

During the month, we divested two holdings, Egyptian Credit Agricole and Pakistani Bank Alfalah. In both cases, it is about two small positions where we were faced with the choice to either increase the position, or exit. We found that we lacked a sufficiently high level of conviction to increase the positions, and therefore chose instead to divest completely. We used the capital to increase our position in Vietnamese Ree, mentioned in the previous monthly letter.

It was a quiet month in frontier markets. MSCI FMxGCC Net TR rose 0.1% in USD (EUR: +0.3%), compared to MSCI EM Net TR which rose 0.8% in USD (EUR: +1.0%) and MSCI World Net TR which rose 2.6% in USD (EUR: +2.8%). In USD calculated, we saw larger declines in Nigeria (-11%), Sri Lanka (-11%) and Bangladesh (-9%). In Nigeria, we noted that the currency weakened 7% against the USD during the month. In addition, we saw that previously depressed interest rates began to pick up again which deterred local investors somewhat. In Bangladesh and Sri Lanka, it was primarily a sell-off from local investors after a period of slightly larger upswing. In Sri Lanka, we note somewhat greater concern after the country has now begun repayments of parts of the debts due in 2021. The country has claimed that it intends to manage the repayments without entering into a new IMF agreement. Given lost tourism revenues for 2021, it creates concern in the market that the country will be forced to restructure its outstanding foreign currency denominated bonds. Sri Lanka claims that it is working on new financing which, in case it materializes, will probably be bilateral in nature. Foreign investors are likely to remain hesitant to the equity market until the time when Sri Lanka shows how it intends to repay the bond debt maturing in 2021 and the coming years.

If we look at the broader picture, 2020 was surprisingly good for our markets and our holdings. We now see a clear economic recovery, both globally and in our markets. However, this is not entirely positive as it at the same time means rising commodity prices and agricultural prices, even adjusted for the weaker dollar. We should increasingly see an uptick in inflation which may lead to expectations of rising interest rates. However, how the central banks choose to act will probably also be affected by the development of the rest of the economy. The lower access to vaccination in most of our countries may affect the recovery rate in 2021 and thus also the central banks’ assessment of the interest rate situation. In the absence of the stimulus packages available to the more well-developed countries, we believe that the central banks will be wary of raising prematurely. Foreign interest in smaller emerging markets remains low. The inflows we have seen to emerging markets since the US presidential election have so far gone almost exclusively to the largest emerging markets. It remains to be seen when/if this interest will also spread to the smaller emerging markets and frontier markets. In a valuation comparison, we conclude that our markets continue to trade at a certain discount compared with their own 5-year average P/BV-valuations, while the US but also the larger emerging markets stand out with valuations that are significantly higher than their 5-year average (See Graph 1). If we zoom out and put stock markets in a 20-year perspective, we conclude that the U.S. is the only market where valuations look really stretched (see Graph 2). 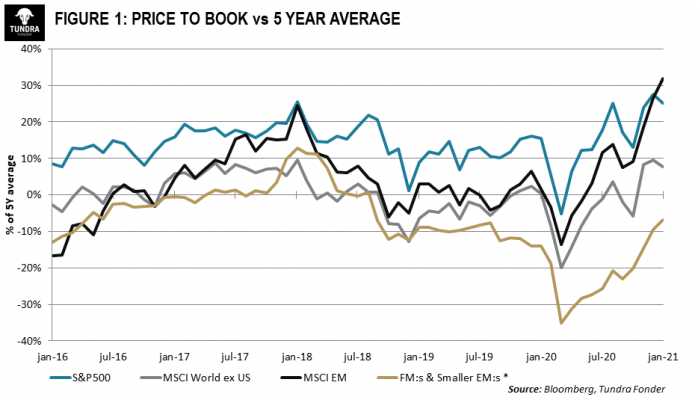 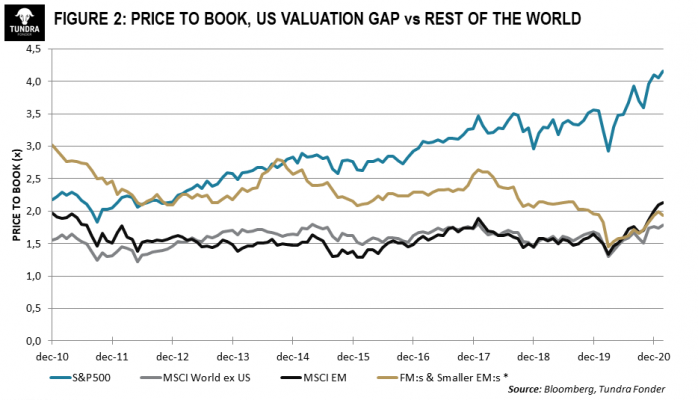