In USD the fund rose 7.6% in December (EUR +5.0%), compared with the fund’s benchmark index MSCI FMxGCC Net TR (USD) which rose 6.0% (EUR: +3.5%), and MSCI EM Net TR (USD) which rose 7.2% (EUR: +4.6%). The US dollar weakened further by more than 2% versus the euro during the month, lowering the fund’s and benchmark returns in euro accordingly. The fund received a positive relative return from our overweight and stock selection in Bangladesh, as well as from our stock selections in Morocco, Sri Lanka and Vietnam. Negative contributions were received primarily from our overweight in Egypt and stock selection in Nigeria. In the latter, we saw a slightly larger depreciation in the currency in the last day of the year, which at best is a sign that the central bank is now gradually allowing foreign exchange trading to normalize, which is a prerequisite for foreign investors to revisit the market. About half of the excess return during the month was obtained from Bangladesh, where it was again the pharmaceutical company Beximco Pharma that performed strongly. The share rose just over 33% (USD) during the month, primarily driven by local investors who took note of continued positive momentum around their commitment to the COVID-19 vaccine. For the full year, the stock returned an impressive 205%. After the rise, the company is now valued at just under 20x the expected annual profit for 2021. This is a more reasonable valuation compared to the beginning of the year and as a result, we reallocated part of our exposure in Beximco Pharma to its significantly lower valued local competitor Square Pharma. We like both companies that constitute quality exposure to an industry in clear structural growth. From current levels, however, we see a higher upside in Square. Even after the recovery of recent weeks, the valuation measured as P/BV remains slightly more than a standard deviation below its 5-year average. To reach its average valuation over the past 5 years, the share needs to rise just over 50% from current levels. In a slightly better trading climate, the company should be an early beneficiary of foreign inflows. The fact that the share is also one of the more liquid in the frontier universe gives it a good risk-reward. Square Pharma is now our third largest holding with a portfolio weight of close to 7%. In Sri Lanka, our healthcare company Asiri Hospitals rose 36% (USD) during the month. There was no specific news behind the move, but rather it is about continued inflows to the equity market from Sri Lankan investors. Asiri Hospitals is an extremely well-run hospital company that has increased its turnover every year for the past 14 years (the company’s financial year ends at the end of March, which explains that the 2020 turnover is stated) (see Figure 1).

When building a quality company from a low base, the focus must be on the long-term task that for a healthcare company is about growth but a precondition being that quality and thereby patients’ trust can be maintained. Periods of necessary investments are followed by harvest periods, but if the task is handled correctly, it is extremely difficult for competitors to overturn such a business. After the rise, the share has reached its average P/BV valuation over the past 5 years. Limited liquidity means that this needs to be a relatively small position for the fund (2.5%). The share belongs to the part of the portfolio where we would normally expect to remain owners for the next 20-30 years. Egypt has been a major disappointment in 2020, despite the fact that the country has handled the economic crisis surrounding COVID-19 decently well. The stock market is down 22% (USD). We believe that this is largely due to the combination of very high real interest rates (1-year interest rate 13%, 3-year 13.6%, compared with an inflation rate of around 6%) at the same time as the currency has strengthened. It has been a rather heavy negative factor for equity investments (Why buy stocks when you can get double-digit returns in the bond market and currency gains as the icing on the cake?). One theory in the market, that we believe is reasonable, is that the high real interest rates are a way of compensating for lost tourism income with inflows into the bond market. If this is true, we should see a gradual normalization in 2021 and most likely a better stock market some time during the year.

The characteristics of the portfolio remain largely non-cyclical, i.e. the companies’ earnings are normally only affected to a limited extent by external factors outside the companies’ control. This traditionally means better earnings visibility in forecasts and, in a normal market climate, a higher valuation for the companies we choose. Those who know us know how we have emphasized the importance of stock-picking, or stock selection. We cannot exemplify this more clearly than the fund’s performance in 2020. None of the equity markets we invest in has performed better than the fund as a whole, and only four out of the nine largest markets showed a positive return in US-dollar (see Figure 3). 2020 was a tricky year, but easier years will eventually come, where investors will also enjoy help from rising stock markets.

MSCI FMxGCC Net TR (USD) rose 6.0% (EUR: +3.5%) during the month, compared to MSCI EM Net TR (USD) which rose 7.2% (EUR: +4.6%). The US-dollar weakened more than 2% versus the euro, lowering EUR-returns accordingly. Among the countries in the benchmark index, Bangladesh and Kazakhstan performed the strongest, with gains of 12.1% and 8.9% respectively (USD). Sri Lanka and Nigeria were the bottom performers, but still rising 1.6% and 3.3% respectively (USD). Among our markets outside the benchmark index, both Indonesia and the Philippines rose 7.2% and 5.2%, respectively, while Egypt and Pakistan were laggards, returning -1.7% and +3.5%, respectively. If we look at 2020 as a whole, three markets returned double-digit in US-dollars: Bangladesh (+16.1%), Nigeria (+24.2%) and Kazakhstan (+11.4%). The weakest performers were Egypt (-22.2%), Sri Lanka (-11.2%), Indonesia (-7.1%) and Pakistan (-5.8%). During the year we saw the US dollar weakening close to 9% versus the euro. The positive thing about a weaker dollar is that this often coincides with better performance in emerging and frontier markets. On the one hand, it is about the countries’ competitiveness where the part of the export that is not denominated in USD becomes cheaper, e.g. in Europe. Another factor is that it contains inflation as imports of necessary goods, such as raw materials, become cheaper. Lower inflation in turn leads to lower interest rates, which benefits both investment and consumption. Lower interest rates also improve the relative attractiveness of the equity market in relation to the fixed income market. Finally, for countries with a large share of foreign currency-denominated debt (Sri Lanka being one example), it is positive given that this part of the debt is often denominated in USD. In other words, what lowers the return for euro investors in the short term tends to be compensated, albeit with a certain delay, in the form of better economic development, higher corporate profits and higher valuations. It is in the nature of people, or should we say investors, to have difficulty believing in reversals after a long period of adversity. Emerging markets as a group underperformed developed equity markets from the end of 2010 until the spring of 2020. Ten years’ of poor relative returns can test the patience of any investor. An entire generation of investors has rightly embraced a certain skepticism towards emerging markets. The situation has been particularly tough for less developed emerging markets where Tundra’s focus lies. The lack of foreign capital has led to currency crises and forced countries to restructure their economies and increasingly rely on domestic investors. The “quantitative easing card” has not been available, but they have had to play with the cards in hand, as developed economies once did. The low global interest rate climate has only in 2020 begun to find its way to these countries and provided a first stimulus, similar to the one we have seen in developed countries over the past ten years. Our countries have gone through a number of crises and should therefore now have several good years ahead of them. The long-term growth potential is indisputable. As a group, Tundra’s largest markets have grown faster than developed markets every decade since the 1970s, despite economic crises and political unrest along the way (see Figure 4). Even the most pessimistic investor will find it hard to argue that this trend will be broken in the coming decades. 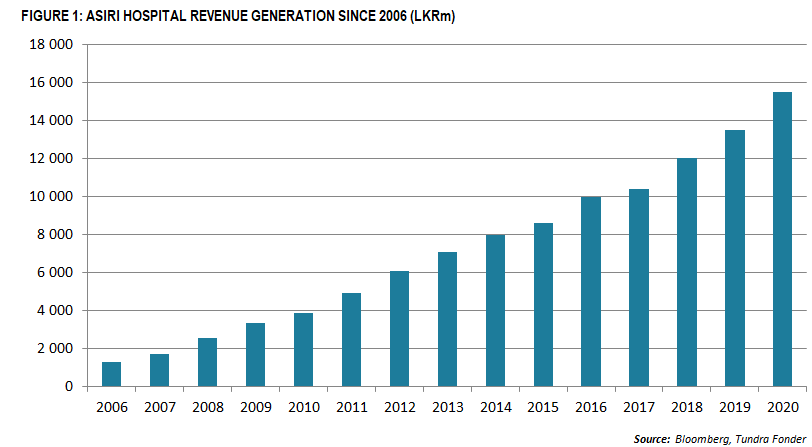 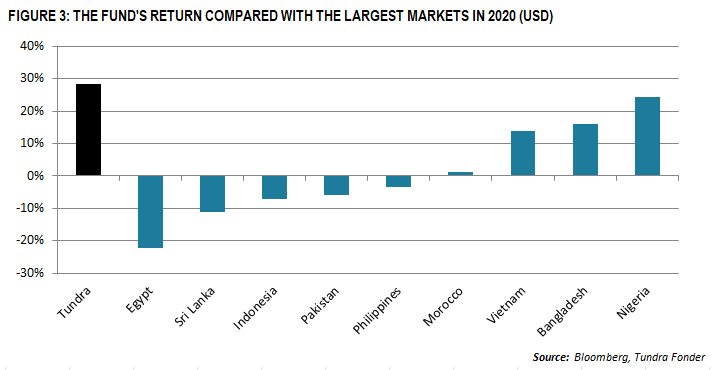 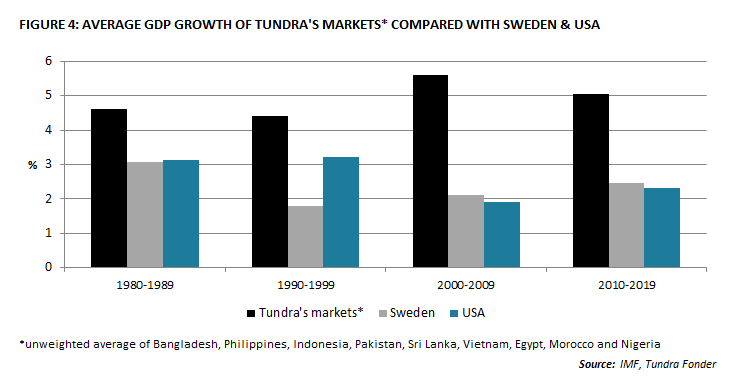