In December, the Fund fell 2.7% compared to MSCI FMxGCC Net TR (SEK), which fell 0.7% and MSCI EM Net TR (SEK), which rose 5.4%. We lost about 1% on our overweight in Sri Lanka (the market fell just below 5%) and another 0.7% on our overweight in Bangladesh (the market fell 10%). In addition, the lack of holdings in Kenya and Lebanon meant another 0.6% underperformance compared to the benchmark index. Positive contributions were primarily received from our stock selection and underweight in Vietnam (+1.2%) and our overweight in Pakistan (+0.3%). Among individual holdings, Pakistani IT company Systems (4% of the portfolio) stood out positively and rose around 10%. The Egyptian education company Cira (2% of the portfolio) also showed a positive performance and rose just below 15% during the month. Negative performance was seen in the Vietnamese consumer conglomerate Masan Group, which fell just over 20% on the announcement that it will take over the Vingroup Group’s retail operations. Uncertainty about the terms and the fact that the business today is loss-making created sales-pressure in the share. In January, we will meet Masan to discuss the acquisition and hopefully we will have a clearer picture of the logic behind the acquisition. Looking at the year as a whole, the Fund rose 5.2%, compared to our benchmark index which rose 13.4%. In principle, we gave up most of the outperformance we delivered in 2018. Although the Fund showed absolute return, 2019 has been a challenging year for us and for quite some time we were significantly more behind the benchmark than we were at the year-end. The gains across our markets have mainly been concentrated within the largest index companies, which is traditionally not where we tend to be positioned. For example, MSCI Egypt (where Comi’s largest bank share is 83%) rose just below 50% during the year while the broader EGX100 index rose only 1% (!). Another interesting example is the comparison between MSCI’s frontier index and its small-cap version. While MSCI FM rose 18% the MSCI FM Small Cap index actually fell 1% during the year (both indices in USD). The positive performance for some of the larger index names can be interpreted as a first sign of investors being concerned about “missing the train”. The fact that smaller companies underperformed to such an extent can be interpreted as there is, however, yet no long-term conviction of permanently better conditions, which means that investors avoid smaller companies. Over longer investment horizons, smaller companies, just as in developed markets, tend to outperform the largest index companies. It remains to be seen when this pattern will resume. What we can do from our side is to continue to invest only in companies where we see a long-term absolute return potential, regardless of market cap, and we are convinced that this investment style will pay off in the long run.

MSCI FMxGCC Net TR (SEK) fell 0.7% in December compared to MSCI EM Net TR (SEK), which rose 5.4%. There were generally quite small movements, with Lebanon (2% in index) and Kenya (9% in index) contributing the most with gains of 17% and 5% each. Bangladesh (4% of the index) was the loser with a decline of just under 10% and the largest index market Vietnam (29% of the index) fell about 5%. In 2019, MSCI FMxGCC Net TR (SEK) rose 13.4%, compared to MSCI EM Net TR (SEK) which rose 24.2%. The strongest performances were found in a number of the smaller markets where both Kenya and Romania rose more than 50%, while Slovenia and Lithuania rose about 40%. Kenya’s rise came on the back of hopes of, and then confirmation of, the removal of the very unpopular interest rate cap introduced just over three years ago for the banks (statutory maximum lending rate based on the policy rate). Romania’s performance should be seen in the light of the sharp fall in the market in December 2018, which meant that the starting level for 2019 was set relatively low. Bangladesh showed the weakest development with a decline of 14%. The country is one of the least transparent we follow and especially so is the case in the political arena. Our impression is that there is some form of an internal political power struggle that during the year surfaced in various “corruption raids” against both companies and politicians, and also an attack on the largest listed company Grameenphone (majority owned by Norwegian Telenor) based on charges of unpaid fees and taxes. We also note that exports (primarily textile products) fell by almost 8% during the first five months of fiscal year (July 1-June 30) 2020. The problems of local manufacturing have probably contributed to the decision to propose the introduction of an interest rate floor and interest rate ceilings (6% and 9%, respectively). The only factor that has not developed negatively is the foreign exchange reserve which, somewhat surprisingly, has remained unchanged since the end of June 2019. The signs of a slowdown should be seen in the light of the economy growing by around 8% in 2018/19. However, expectations of corresponding growth for 2019/20 will probably be revised down. That being said, the stock market seems to have discounted the tougher conditions for some time, and after the downturn in 2019, the valuation measured as P/BV is at an 8-year low.

There will always be plenty of risks in our part of the world. However, we note that the last 5 years have cleared out the worst of these. The devaluations during 2014-2019 mean that currency movements from now on should be both smaller and more selective. For some of our markets, we also note strong positive news flow (especially Pakistan and Sri Lanka) after several years of very bad headlines. The average valuation in the portfolio (harmonic P/E average) is about 8x for the current financial year (a mix of calendar year 2019, and fiscal year 2020 which ends either last June or, in some cases, last March 2020). Over the past five years, the average company in our portfolio (median) has grown its sales by 14% annually in local currency (on 10 years 16%). This means that their operations are doubling approximately every 5 years. The higher inflation and higher interest rates in our markets will on average shave off 3-5% of that growth through currency depreciation in the eyes of foreign investors. However, we still expect double-digit growth which justifies a higher valuation than where we are right now. Currency adjustments also tend to occur in cycles where we have seen unusually large corrections over the past five years. This, in turn, makes it likely that currency movements will be less severe in the coming five years. It is an understatement to say that conditions in global financial markets have been unusual in recent years, with negative interest rates and share repurchases in the wake of this. Some might wonder, why even bother with the less developed part of the world when you can have such a party at home. Trying to time exactly when the interest in smaller emerging markets returns is difficult but also not very important for long term investors. What we find is that the valuations ​​are very low from a historical perspective, our companies have continued to grow at a reasonable rate through an unusually tough crisis and we see reasonable conditions for margin improvements in the future as well. In addition, the low correlation with both developed stock markets and larger emerging markets goes two ways. Investing in our part of the world offers a good diversification for those who want to maintain equity exposure, but asking themselves how long equity rallies in the world’s larger equity markets can continue at the current rate.

Bank Alfalah Limited, a Pakistani bank, was added to the Fund in December.

Incorporated in 1992, the Abu Dhabi Group owned bank has over 600 branches in Pakistan as well as an international presence with branches in Bangladesh, Afghanistan, Bahrain, and the UAE. As per the State Bank of Pakistan guidelines, the company has a green banking policy, which takes into account environmental risk management (EMS) practices, facilitating businesses willing to invest in EMS and resource efficiency and a reduction of the bank’s carbon footprint. The bank has reportedly invested in converting 150 ATMs into solar energy and decreased its paper consumption while replacing diesel-fuelled generators with the better alternative of backup power supply in the form of uninterruptible power sources (UPS) that supply energy stored in batteries. For its employees, the bank provides a monthly childcare allowance for female staff and single parents along with flexible working hours for all employees; paternity and maternity leaves are also provided. A whistleblowing policy is in place and reportedly 30 complaints were submitted to the audit committee in 2018. The company’s CSR program caters to a myriad of philanthropic investments in social welfare, environmental sustainability, education and health in Pakistan.

No companies were divested from the Fund this month. 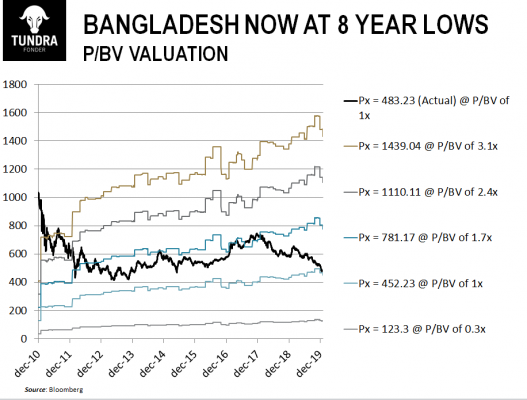