In USD the Fund rose 8.4% (EUR +7.4%) in August, compared with MSCI FMxGCC Net TR (USD) which rose 7.3% (EUR +6.3%), and MSCI EM Net TR (USD) which rose 2.2% (EUR +1.3%). Our overweight combined with good stock selection in Bangladesh as well as stock selection in Vietnam contributed positively to the relative return. We noted continued buying from local investors in our major markets. Bangladesh rose more than 20% and our sub-portfolio around 30%. Our largest holding in Bangladesh, the pharmaceutical company Beximco Pharma, rose just over 40%, this time partly driven by the news that it is entering into a cooperation agreement with an Indian pharmaceutical company for the production of a vaccine against COVID-19. In Vietnam, there was a strong interest in the consumer staples company Kido Frozen Foods, which is continuing its recovery ahead of the merger with the parent company KDC, and due to an announcement of a joint venture with the giant Vinamilk. Negative contributions to the relative performance were received from Sri Lanka, where we do not own shares in the best share of the month, index-heavy John Keells. Pakistani TPL Properties rose nearly 60% during the month after announcing a sale of its largest property, Centre Point. Only the agreed transaction price corresponds to around PKR 16/share, compared with the share price (after the rise) of PKR 11. Among the weak performing stocks during the month the majority were from Egypt, where continued heated discussions between Egypt/Sudan and Ethiopia in particular regarding the latter country’s dam construction in the Nile. The Nile originates from two major rivers, the Blue Nile (from Lake Tana in Ethiopia) and the White Nile (from Lake Victoria in Uganda, Tanzania, and Kenya) and accounts for about 85% of Egypt’s waters and is thus critical to the country. The discussions concern partly how fast the dam should be filled, but mainly how the water flow should be regulated during times of drought. In early September, the United States announced that it was temporarily suspending aid to Ethiopia pending the resumption of negotiations with neighbouring countries. We expect a diplomatic solution to be reached, but the negotiations may take time.

No new holdings were added during the month. During the month, we sold two Sri Lankan holdings, Tokyo Cement and Access Engineering. We conclude that the upside potential compared with other holdings in the portfolio with corresponding liquidity did not justify continued ownership after the recent rise in the shares. We also sold our remaining small position in Turkish Medical Park (the majority was sold in July). The position gave a return of just over 100% (USD) for a two-year holding period, which made a good contribution to the Fund’s return. Our Turkish investment is a good example of when we make temporary deviations into more traditional emerging markets when selective opportunities arise.

MSCI FMxGCC Net TR (USD) rose 7.3% in August (EUR +6.3%), compared to MSCI EM Net TR (USD) which rose 2.2% (EUR +1.3%). The best index markets during the month (USD) were Bangladesh (+23%), Sri Lanka (+18%), Kenya (+10%), and Vietnam (+8%). None of the major markets developed negatively, which is unusual these days. In Bangladesh, the market was driven by local investors who, after stimulus packages and lower interest rates, entered the stock market. Bangladesh is, perhaps a little unexpectedly, a market with a large proportion of active private small investors. By comparison, Bangladesh with its 160 million inhabitants has 1.6 million equity accounts, while the corresponding number in Pakistan (200 million inhabitants) is around 250,000. As a comparison, the largest internet broker in Sweden – Avanza – has a client base of above 1 million. As we have said for a couple of months, buying in Pakistan, Sri Lanka and Bangladesh, has been dominated by local buyers in recent months where lower interest rates have attracted investments to the equity market. Given that local investors tend to account for 80-90% of trading in these markets, their obsession with what foreign investors do is a bit surprising. Their flows are much more important for the performance of the stock market than the foreign investors’ flows. Pakistan, Sri Lanka, and Bangladesh have been three markets foreigners avoided for a long time given that all countries have gone through a period of significant uncertainty, both politically and economically. In the end, investors need to assess what is discounted in the current share prices and what is not. The only times when you can buy really good companies at low multiples are unfortunately during periods when most are negative to the market and you are pretty alone on the buy-side. All equity prices are affected by expectations of their financial performance, but also by how investors view the market they are listed in or have their business in. You can say there is an alpha component and a beta component, where the alpha is decided by the company-specific business performance and beta the general market performance. In the longer term, a company’s share price will be determined by its financial performance, but in the short term, all companies are impacted by the general market development. This, of course, means opportunities for long-term investors. A typical Tundra investment is to buy really good companies during periods of really bad market sentiment. Assuming you are prepared to take the risk of being premature, we believe it is the right way to tackle these unexplored and, at times, abandoned markets. Especially if you move outside the largest index stocks. Or as George Soros once said: “The most money is made when things go from terribly awful, to just awful”. In recent years, frontier markets have been hit twice. Partly the extremely tough competition from developed markets (who needs frontier markets when you can double your money in technology stocks in a few months?) and partly due to problems of their own, I.e. that they have undergone tough economic crises. This has overshadowed the fact that many companies continue to maintain roughly the same growth as before, which in turn means that they are cheaper than in many years. Regardless of which of our larger markets we look at, we note that expectations from foreign investors remain extremely low. The equity market, provided reasonable diversification, is a superior form of savings for longer periods of time. The only thing investors should beware of is after too long and sharp rises, characterized by great and broad-based optimism. This is not the case in smaller emerging markets today and they thus offer a good diversification option for investors who are becoming increasingly concerned by stretched valuations in developed markets, but who want to remain invested in the equity market.

No new holding was added to the Fund in August.

DISCLAIMER: Capital invested in a fund may either increase or decrease in value and it is not certain that you be able to recover all of your investment. Historical return is no guarantee of future return. The state of the origin of the Fund is Sweden. This document may only be distributed in or from Switzerland to qualified investors within the meaning of Art. 10 Para. 3,3bis and 3ter CISA. The representative in Switzerland is OpenFunds Investment Services AG, Seefeldstrasse 35, 8008 Zurich, whilst the Paying Agent is Società Bancaria Ticinese SA, Piazza Collegiata 3, 6501 Bellinzona, Switzerland. The Basic documents of the fund as well as the annual report may be obtained free of charge at the registered office of the Swiss Representative.. 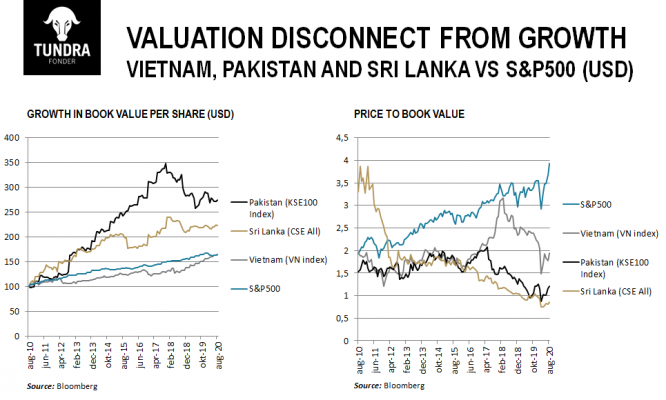