The fund rose 2.4% in August, compared to MSCI FMxGCC Net TR (SEK), which rose 1.5%. The largest relative contribution accrued from our allocation in Egypt (1.5%), stock selection in Vietnam (+0.8%) and our Turkish holding Medical Park (+0.5%). Negative contributions accrued from our lack of holdings in Morocco (-0.5%) and our position in Botswana (-0.4%) and Pakistan (-0.4%). Even though it is too early to talk about a shift in sentiment towards smaller emerging markets, we note somewhat more constructive conditions since mid-July, where investors now are looking past known concerns and are willing to discuss current valuations vs future opportunities.

As we described in our June newsletter, our portfolio is valued well below historical multiples despite relatively unchanged long-term growth conditions. However, the conditions for some of our companies have improved. One such holding is Systems Ltd who is Pakistan’s leading listed IT company with 80% of its turnover in exports, which means that the devaluation of the rupee has given them further stimulus to growth. During the month, the company released its report for the second quarter. Sales increased 62% on an annual basis and gross profit increased 91%. Foreign exchange gains before the bottom line added to the net profit and earnings per share rose 142%. Excluding the one-off items, the company is valued at around P/E 8x for the current year. Their goal is to consistently grow 25% per year. During the last three quite tough years in Pakistan, sales have grown 31% per year. More than 80% of the company is owned by employees and former employees. With that being said, the company is a good example of the next generation of Pakistani companies that successfully take market share globally. Read more on the company’s website: https://systemsltd.com/.

The portfolio is valued at P/E 7.0 for the current year (the harmonic P / E method) and is trading at a dividend yield of 4.9%.

MSCI FMxGCC Net TR (SEK) rose 1.5% during the month, compared to MSCI EM Net TR (SEK), which fell 2.5%. Although Argentina is no longer included in the frontier index (used to be around 20%), the August crash of 49% is worth highlighting. On August 12th, the market fell 40% in one day. The crash came after President Macri, in the primary elections, lost with an unexpectedly large margin against left-wing candidate Fernández, whose co-candidate Christina Kirchner is the market’s biggest unknown. The second round of elections will take place in October and if Macri loses, it is safe to say that a very uncertain period awaits the country’s economy and equity market. Outside Argentina, we noticed large discrepancies between markets. Egypt rose close to 13% on expectations of interest rate cuts, while Pakistan fell just over 3%, mainly due to concerns in regards to the Kashmir conflict (read more in the section on Pakistan). Frontier markets and smaller emerging markets were less badly affected by the continuing tense trade war between the US and China, but the headlines still instilled some caution. It has been a rather strange year where our perception is that investors are quite cautious and pessimistic overall. However, this has not been generally reflected in all equity markets, but selectively and especially in small and medium-sized companies. We have all noted that the best appetite has been seen in the bond markets. After the crises of recent years, many smaller emerging and frontier markets have completely disconnected from developed markets. Interest rates remain relatively high with the exception of Vietnam (Pakistan 10-year bond 12.7%, Sri Lanka 10.1%, Egypt 14.7%, Nigeria 14.4%, Kenya 11.5%, Bangladesh 9,3%, Vietnam 4.1%,). They have not enjoyed the leverage that monetary policy eases in Europe and the United States have entailed. Current interest rate differentials (spreads) can be said to be a reflection of five quite troubled years in several of these markets. However, after the wave of devaluations that have taken place, it is justified to wonder if the spreads will remain at these levels.

If it is not believed that interest rates in the western world will rise again in the near future, should not the phenomenon eventually spread to less developed parts of the world? And if you do not think that the Western world interest rates are sustainable – are you really more unsafe in countries that do not base their investment decisions on expectations of near zero percent interest rates?

One company was re-added to the fund in August 2019. Pak Elektron Limited (PEL) is a Pakistani manufacturer and supplier of power equipment and home appliances, based in Lahore. Established in 1956, PEL is recognized for its quality standards and technology; over the years, PEL has formed alliances with several international giants including General Electric, Fujitsu and Hitachi. Efficient use of energy sources is a priority at PEL; thus, the company has developed an Energy Information System to identify energy losses at the production units. With regard to social policies, stringent safety policies are put in place to ensure the maximum occupational health and safety for all employees. PEL also strives to maintain a culture of diversity, equal opportunity and non-discrimination. The company engages in different CSR initiatives on a regular basis, such as providing scholarships for engineering students, donating to the neonatal intensive care unit of Fatima Memorial Hospital and sponsoring a cricket match for the Faisalabad Deaf Cricket Association.

No companies were divested from the fund this month.

DISCLAIMER:DISCLAIMER: Capital invested in a fund may either increase or decrease in value and it is not certain that you be able to recover all of your investment. Historical return is no guarantee of future return. The state of the origin of the Fund is Sweden. This document may only be distributed in or from Switzerland to qualified investors within the meaning of Art. 10 Para. 3,3bis and 3ter CISA. The representative in Switzerland is OpenFunds Investment Services AG, Seefeldstrasse 35, 8008 Zurich, whilst the Paying Agent is Società Bancaria Ticinese SA, Piazza Collegiata 3, 6501 Bellinzona, Switzerland. The Basic documents of the fund as well as the annual report may be obtained free of charge at the registered office of the Swiss Representative. 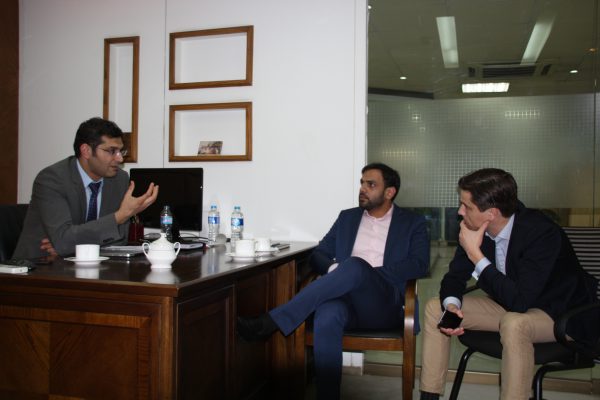