The Fund rose 2.5% during the last month of the year, compared to MSCI Pakistan IMI Net TR (SEK) which rose 1.9%. The largest contribution (0.4%) was received from Health Care where the Fund’s smaller position in the private hospital company Shifa Hospitals rose just below 50% in December. The Fund also received a positive contribution from our stock selection in the financial sector, where primarily one of our major positions in Meezan Bank (not included in the index) rose 8% in an otherwise quiet market. We had to give back some excess returns in Basic Materials, where we saw profit-taking in some of our smaller positions in the more cyclical industries, such as Cement and Steel. For the year as a whole, we have been very transparent about the mistakes we have made and the somewhat special conditions given the Fund’s exit from the Swedish Pension system at the end of September (together with 300 other funds). Internally, we see September 30 as a new starting point where the first goal is to once again ensure that we are ahead of the benchmark index since the start (currently 8% behind). No companies were added or divested during the month of December.

During the month, MSCI Pakistan IMI Net TR (SEK) rose by 1.9%, which can be compared to MSCI FMxGCC Net TR (SEK) which fell 0.7% and MSCI EM Net TR (SEK) which rose 5.4%.  December marked the fourth consecutive monthly gain after the bottom in August 2019.  As previously discussed, the improved market performance can be derived from a strong set of economic data, in terms of the balance of payment and bottoming out of demand combined with the new government’s and central bank’s improved credibility among investors. In December, Moody’s upgraded Pakistan’s long-term debt outlook from negative to stable. This change in outlook is credited to improvement in the balance of the payment dynamic that was supported by policy adjustments combined with currency flexibility. Additionally, during the month, IMF released its first review of Pakistan’s economic performance under the Extended Fund Facility, which stated that Pakistan’s economic reform program is on track. The IMF has revised down the previously over-ambitious tax collection target of FBR (a tax collection authority) by PKR 265bn, but at the same time revised the upward non-tax revenue target by PKR 360bn (that would be financed from privatization proceeds and telco license renewal fees). Further on, the report also pointed out the possibility of an interim budget, which reportedly would slap additional taxes of PKR 150bn, to compensate for struggling revenue collection of FBR given the lower economic activity. The provisional tax collection figures for the first half of the fiscal year suggest that the authority has collected PKR 2,080bn against the revised target of PKR 2,198bn (implying a growth of 16% YoY and a shortfall of PKR 118bn against the revised target). Still very impressive, especially given the very hard contraction seen in the economy over the last 6 months.

The latest economic data releases suggest that the economy is heading in the right direction where the exports and remittances grew by 10.3% YoY and 9.4% YoY in November. Similarly, with a continuous contraction in the imports (down 13.1% YoY), the Current Account Deficit (CAD) posted a decline of 72.6% YoY to USD 319m. The return to a CAD in November after the surplus in the preceding month was expected as October included a non-sustainable jump in the service exports and remittances. Additionally, the Central Bank FX reserves rose by USD 2.4bn to USD 11.5bn during the month, a level that was last witnessed in April 2018. These latest additions primarily came from ADB and IMF disbursements, but also to some extent from continued foreign portfolio inflows to the treasury and bond market (now USD 1.5bn since June 30th, 2019).

The government has initiated work on the reforms, albeit slowly, to empower NEPRA and OGRA (the former is an electricity regulator and the latter is an oil & gas regulator) to directly pass on changes in energy prices to consumers without government consent. If approved, this would stop the accumulation of arrears within the power sector that is estimated at 4% of GDP. Lately, the local regulator has further broadened the scope of AML/CTF laws to comply with the IMF and FATF requirements. Further on, in December, the government has made few amendments (though controversial) to limit the scope of NAB (the anti-graft body) not only to increase the effectiveness of the accountability process but also to remove grievances of the business community & bureaucracy.

Moving ahead in January, we expect the government to ratify the recently proposed electricity and gas tariffs hike in an attempt to bring the costs to recovery level. A move that would further reduce the political goodwill of the ruling party, but enough to keep the IMF program afloat. Also, SBP is expected to unveil monetary policy for the next two months, where we believe that SBP would keep the rates on hold. We expect the first rate cut to come earliest in the March meeting.

The rise in recent months has been rapid and powerful, but we expect a quieter development from here. Some black swans remain – the Kashmir conflict remains a potential risk factor that can occasionally flare-up, even if the risk of a full-scale war stays low. Regarding the US-Iran tensions, we view it as highly unlikely that Pakistan will choose a side, as Pakistan has strong relations with both Saudi Arabia (pro-US) and China (pro-Iran). However, a sharply higher oil price would put pressure on Pakistan’s current account deficit and keep inflation elevated, which would probably delay expected interest rate cuts and the general economic recovery. If we exclude these geopolitical concerns which tend to be like predicting car crashes, we are optimistic. Perhaps the most important reason is that this time the market is moving on a shift in long-term expectations (effects of reforms) rather than temporary crutches such as tax incentives, subsidies or interest rate cuts. This means that the market is less likely to react to temporary disturbances. The buying, so far, has been done exclusively by local investors (foreigners have been net sellers since August). However, we believe that the reforms currently being implemented by Pakistan will be especially appreciated by foreigners who have historically been very sceptical of Pakistan. During periods when foreigners have been net buyers in the stock market (3-4 year cycles), inflows have been in the region of USD 300-400m per year. We have not yet seen this. In 2020, we expect a status quo in FATF’s evaluation in February, but we do not see a blacklisting as a reasonable scenario.  Partly based on the pace of implementation which is impressive, even more so due to the actual steps needed to blacklist a country. Pakistan needs three members that will oppose, it has five (Turkey, China, Malaysia, Saudi Arabia, and the GCC-council). It is a significantly higher probability that Pakistan will be removed from the list, but that is very unlikely to happen until the second half of the year. In March (earliest), we expect the first interest rate cut. Inflation has remained high (around 12.5%) but has recently been boosted by temporary shortages in the food sector. Continued tariff increases in electricity and oil/gas prices should mean double-digit inflation also in 2020, but it should slowly come down from current levels unless the oil price spikes. The central bank’s goal is to reach a normal inflation rate of 5-7% within 24 months. Assuming a real interest rate in the range 1.5-2.5%, we are talking about a policy rate in the range of 6.5-9.5% at the end of 2021, compared with the current 13.25%. Gradual interest rate cuts over the next two years should be supportive for the equity market. Valuations remain low with around a 40% upside to average P/BV valuation (5 and 10 years). And in the background, you have the ongoing reforms that are likely to be further highlighted in the World Bank’s Ease of doing business index for 2021 in the latter part of the year. The conditions for good performance over the next 2-3 years are still very good. 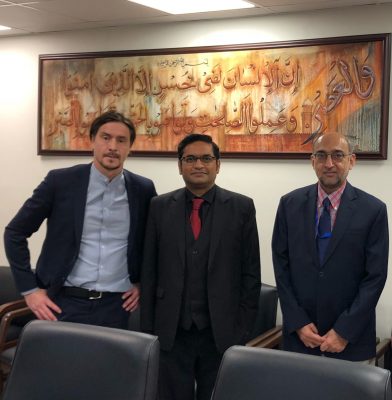