In March, the Fund rose 2.1% (SEK) compared to its benchmark index, FTSE Vietnam Index TR (SEK), which rose 0.4%. Positive contribution accrued from the Fund’s overweight in Consumer Discretionary (TNG Investment, Dry Cell & Storage Battery Company, and Phu Nhuan Jewelry), Materials (Hoa Sen Group, Bim Son Cement) and Financials (Vietcombank). Additionally, some of our off-benchmark bets including Kido Foods, FPT Corporation, and Vietinbank also contributed positively. After having a few quarters of poor performance, Kido Foods (consumer food) restrategized towards improving its core business by strengthening its product portfolio and distribution system, which is likely to boost margins going forward. Thai Nguyen Garment (textile) has benefitted from the US/China trade war since foreign buyers are switching to other markets to buy textile products. We believe that the trend is likely to continue as labor costs in Vietnam are lower than in China and Vietnam’s free trade agreements (EU is likely to be signed in August 2019) will keep Vietnamese products competitive. FPT Corporation had a robust earnings growth in most of its core business. In addition, its recent investments in modern IT businesses such as AI platform, deep learning, cloud service, IoT, Robotic Process Automation, etc. is starting to pay off.

Further on, our underweight in Real Estate, (mainly in Vingroup and Vinhomes) had a negative impact on the Fund´s relative performance. Our off-benchmark bet, Dat Xanh Group also performed poorly during the month after the announcement to issue 25% new shares to existing shareholders in the AGM against the expectations of a dividend. During the month, the Fund sold a few real estate players and illiquid holdings.

The Vietnamese market continued its upward trend during the first half of March and FTSE Vietnam Index TR (SEK) marginally increased by 0.4% compared to a 1.3% increase in the MSCI Emerging Markets and a 1.5% negative return in the MSCI Frontier Markets xGCC. However, concerns over external risks emerged in the second half due to the negative headlines regarding the inverted yield curve of the US’s government bonds, raising recessionary risks. Local investors overreacted to the external factors, while foreign investors took the opportunity to increase their positions in Vietnam. The net inflow from foreign investors stood at USD 60m and Liquidity remained fairly decent with an average daily traded value of USD 240m.

Most of the companies in Vietnam are going through their Annual General Meetings where business and performance targets for 2019 are being discussed. No surprises noted apart from Hoa Phat Group, which submitted a quite conservative target for earnings (-22% Y/Y) despite the big jump in capacity from its latest Dung Quat steel complex. The company anticipates a lower steel price and gross margin this year due to competition. Vingroup asked at its recent EGM to issue 250 million new shares via private placements to no more than five foreign institutional investors at a minimum deal size of VND 25,000bn (USD 1.07bn). Reportedly, South Korean SK Group is likely to be one of the buyers. Proceeds from the transaction will be used to fund new businesses such as Vinfast (automobile), Vinsmart (smartphone), VinTech (IT), repay debt, and increase working capital.

During the month, the macro numbers painted a positive picture as the Q1 2019 GDP growth was reported at 6.79%, which is higher than the government initial forecast of 6.58%. Most sectors did well in Q1, except for Mining which saw a decline of 2.2%. The March CPI fell 0.21% M/M (2.63% Y/Y) due to the soft food and foodstuff category. The government decided to increase the electricity price by 8.3% after holding off for over two years. This should likely add 0.3% to the CPI in the upcoming months. Total committed FDI in Q1 2019 surged to USD 10.8bn (+86.2% Y/Y), in which disbursement was USD 4.12b (+6.2% Y/Y). In terms of trading activities, Vietnam exported USD 58.51bn worth of goods and imported USD 57.98bn in Q1 2019, translating in a trade surplus of USD 536m. The U.S remained the biggest importer of Vietnamese goods with a total value of USD 13bn. China, on the other hand, was the largest export-country to Vietnam with a total value of USD 15bn. The March PMI mildly increased to 51.9 from 51.2 in February and has been in the positive zone (>50) for 40 consecutive months, which signals the continuous expansion of the manufacturing sector. 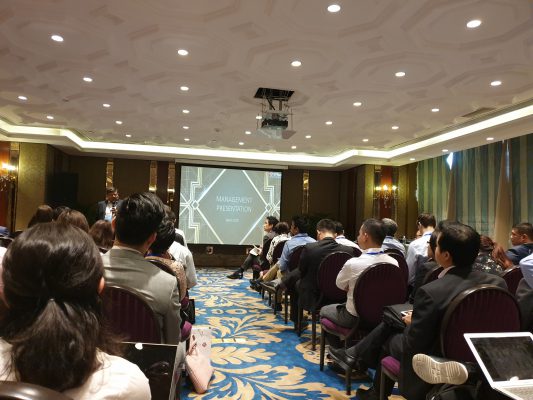