The Fund fell 0.1% during the month, which was better than MSCI FMxGCC Net TR (SEK) which fell 1.1%. Our overweights and stock selection in Pakistan and Sri Lanka were the main reason and contributed 1.8% and 1.1% to relative performance. Our positions in Bangladesh as well as the lack of holdings in Kenya were the primary negative relative contributions and cost 1.2% and 1.1% each in relative return. Important contributions among individual shares were DG Khan Cement and National Bank of Pakistan, which rose just over 20% during the month. These holdings contributed positively with 0.6% and 0.5% respectively. Larger negative contributions were mainly received from Bangladesh, where IFAD Autos fell 30% and Brac Bank fell just under 20% on a troubled Bangladeshi stock exchange. These two holdings contributed negatively with 0.5% and 0.3% each.

During the month, we added a smaller position in one of Pakistan’s largest pharmaceutical companies, Abbott Laboratories, which we believe has taken too much beating after the latest quarterly report. Abbot has grown at an average of 10% in USD annually over the past 20 years. We expect the company to return to normal profitability within 2 years, which means a valuation of around P/E 8x at current price levels. This can be compared to a historical average multiple of 16x over the past ten years. The company is 78% owned by Abbott Laboratories in the US (listed on the NYSE). They have a broad portfolio of medicines and, with the support of the parent company, they will remain at the forefront in terms of quality. As shown in the attached graph, the parent company and the Pakistani subsidiary have, in recent years, taken different paths in terms of share price performance. We believe that at this time it is a good time to re-position in the stock.

MSCI FMxGCC Net TR (SEK) fell 1.1% during the month, compared to MSCI EM Net TR (SEK) which rose 2.4%. Among our core markets, Bangladesh developed particularly weak with a decline of 7.9%. There have been a number of troubling months where foreign investors are worried about the currency being devalued. In combination with an ongoing lawsuit against the country’s largest and most well-known company Grameenphone and increasing concern about the health situation in the banking sector, interest has been weak.

Kenya was the best market. It now seems that the highly criticized interest rate ceiling (the maximum level that banks are allowed to charge when lending) will be eliminated, which meant that the banking sector, in particular, rose sharply. We do not have any investments in Kenya, as we consider that the risks at the macro level as well as liquidity in the market, are not fully offset by the valuations of the handful of companies we consider to be of sufficient quality. However, the decision on the interest rate ceiling is a big step in the right direction.

Sri Lanka will hold its presidential election on November 16. The market hopes that Gota Rajapaksa, brother of former President Mahinda Rajapaksa, will win. Above all, the market wants a clear policy and a decision-making parliament. Since the last presidential election in 2015, there has been enormous friction within the government, which has made decisions on long-term reforms difficult. Provided Rajapaksa wins, we believe the market can continue to recover. To reach its historical average P/BV valuation, the stock market needs to rise around 60% from current levels. Even Pakistan, where we are travelling at the time of writing, we believe has initiated a recovery. Inflation now seems to have peaked and long-term interest rates have already fallen well from the peak. The companies’ quarterly reports have come in worse than expected, but share prices have nevertheless responded positively. The first interest rate cut is expected in early 2020. We believe that the beginning of an interest rate cut period can be the starting point for a broader inflow to the market.

We are currently on a one-week trip in Pakistan and so far, our impressions are confirmed by our on-site meetings. We note that, after a very painful change, the companies are in deep pain but are starting to adapt to the new circumstances and we have probably passed the bottom in terms of margins and demand. To reach its 10-year average in terms of P/BV the market currently needs to rise 55%. Together with Sri Lanka, Pakistan is the market where we believe the expectations of foreign investors have the potential to improve the most in the next twelve months. The average valuation of the Fund is currently P/E 7.2x.

Abbott Laboratories Limited was added to the fund in October.

Incorporated in 1948, the Pakistani company manufactures, imports, and markets products in diagnostics, medical devices, nutrition and branded generic pharmaceuticals. Reportedly, the company’s waste management strategy includes the Zero Waste to Landfill initiative (certification received in 2017) where waste is recycled instead of being sent to landfills. The company also uses a composting machine that can convert 400 kgs of material as compost per day. Abbott Laboratories has designed an online training program on ethics and compliance topics to provide its employees with the practical knowledge needed to identify and report legal or ethical issues that they may encounter during employment. A whistleblowing program called “Speak Up” is also in place to handle reports of potential violations.

No companies were divested from the fund in October. 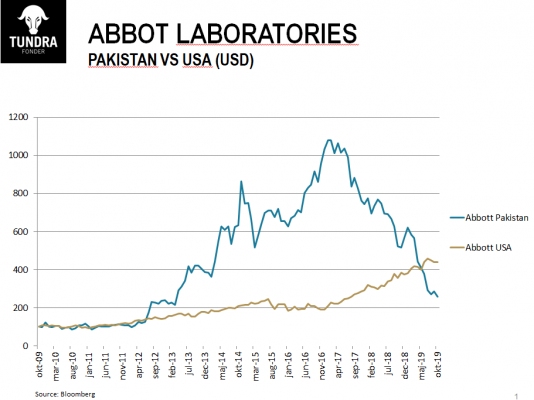