The Fund rose 10.3% in April, compared to MSCI FMxGCC Net TR (SEK) which rose 5.4% and MSCI EM Net TR (SEK) which rose 6.7%. The Fund’s sub-portfolio in Pakistan rose just over 20% during the month and contributed about half of the excess return. The lack of holdings in Morocco contributed about a quarter of the excess return, and the stock selection in Vietnam contributed about a quarter. In Pakistan, one of the Fund’s largest holdings, the IT company Systems Ltd, rose by more than 30% in April. The company released its report for the first quarter, where profit before tax increased by around 60%. Foreign exchange gains, given the weaker rupee and the fact that about 80% of the company’s revenue comes from exports, exaggerated the results, however. Operating profit (before FX gains) rose 21% and sales rose 39% compared to the first quarter of 2019, which is still impressive. Short term, the company does not currently see a material negative impact on the business. The stronger rupee so far in the second quarter will have a negative impact in the short term. On the demand side, however, the company currently sees only minor impact where some slowdown in certain segments is partly offset by increased demand for digitalisation projects. In Vietnam, the construction steel company Hoa Sen Group stood out with an increase of just below 70% during the month. However, the upturn should be seen in the light of a longer period of weak performance for cyclical shares. Airports Corporation of Vietnam (ACV) also rebounded strongly during the month, with an increase of about 40%. It is difficult to see a business that is more severely affected by the COVID-19 crisis in the short term than an airport operator. The share price bottomed at -45% (end of March) and is still down 26% for the year as a whole. For this type of business, it is necessary to look past the current situation and look at the valuation based on how the company is likely to look 5-10 years ahead. We generally like companies with “walls” around their business, which airports are often an example of. 2020 will obviously be a lost year, but if we look at current valuation vs 2019 figures ACV currently trades at an EV/EBITDA of 9x, which can be compared to Airports of Thailand at 22x and Shanghai International at just below 20x. In ACV’s case, non-aeronautical services at the company’s 20+ airports around Vietnam are still only 20% of revenue but should, based on the revenue structure of other Asian airport operators, in the long term reach close to 40%. This indicates that the company’s revenue will grow faster than air traffic and that margins should improve over time. One or even two years of negative impact will then play a minor role, especially as the company is very strong financially with net cash in the balance sheet.

During the month, we exited some smaller positions that for a variety of reasons have become a bit too small. Our tilt towards medium and small companies means that we normally work with slightly more companies (40-60 companies) than funds that focus on large capitalisation companies. However, our goal is that no long-term position should be less than 1%. If we end up in that position, we must choose whether we have a sufficiently strong conviction to increase the position or whether we see better use of the capital in other positions in the Fund. During the month, we divested four smaller positions in Pakistan: Pak Elektron, Ferozesons Labs, Century Paper, and HUM Networks. None of the positions exceeded 0.5% of fund assets. No new holdings were added during the month.

MSCI FMxGCC Net TR (SEK) rose 5.4% in April, compared to MSCI EM Net TR (SEK) which rose 6.7%. Vietnam was the best performing larger market with an increase of about 13%. Nigeria also belonged to the winners with an increase of about 10%. The weakest performance was seen in Morocco (-2%) and Kazakhstan (+3%). Among Tundra’s markets outside the benchmark, Pakistan rose 18%, while Egypt rose just under 8%. April’s upturn should be seen as a rebound after the very weak March. Massive stimulus around the world has partly spread to frontier markets and smaller emerging markets. For example, Pakistan lowered their policy another 2%-points during the month (a total of 4.25%-points in March and April). Among our markets, the stock exchanges in Bangladesh and Sri Lanka were closed throughout April due to hard quarantine measures. Both exchanges are expected to resume trading in early May. Although the world’s stock markets have recovered in the meantime, we should expect at least a short term dip when they open as queued sell orders are to be executed. However, given the already very low valuations and given the subsequent recovery in other Asian frontier markets, it is hard to see a longer-lasting downside. If we look at the reports for the first quarter released in April, they were “as expected a little weaker than expected” and thus left no marks. However, we believe that the real effects on companies will be seen mainly at the beginning of the second quarter (April should be particularly bad). Even though it is likely that the market understands this, it may cause some caution going forward given the strong stock market recovery during April. This probably applies to all global equity markets. For the outlook in general, we have perhaps come so far into the crisis that investors have been able to visualize their worst-case scenarios. Increased awareness that the world underestimated the rate of spread (and thus, more importantly, mortality) may mean that the gradual easing of quarantine regulations we now see in many countries will not be reversed in the near future. A slightly more functioning world economy during the second half seems reasonable to expect at the present time. The major risk of smaller emerging markets is short-term refinancing risks in foreign currency. Paying off debt in foreign currency without squeezing already weak currencies becomes difficult in times when exports decline sharply and tourism revenue completely disappears for a period. Here, we believe that international institutions such as the IMF and also the G-20 countries addressed these particular concerns through debt relief packages with shorter processing time than normal. Even though we are facing another couple of uncertain months, long-term investors should probably spend more time looking ahead. In our previous monthly letter, we showed the already weak performance over the past 5 years for most of our markets, which means that valuations overall were historically very low already at the beginning of 2020. Combined with lower interest rates and stimulus packages, it opens up for a gradually better second half of 2020 and an interesting 2021.

In April, four Pakistani companies were divested from the Fund due to financial considerations, including Century Paper & Board Mills Limited, Pakistan Elektron Limited, Hum Network Limited, and Ferozsons Laboratories Limited.

No companies were added to the Fund in April 2020. 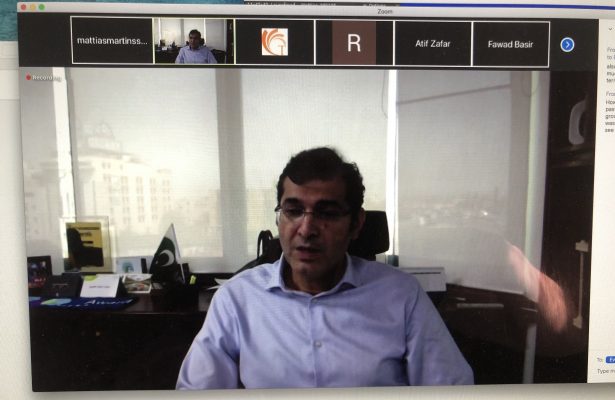